NEW YORK (CBS/AP) - The mayor of a small southwest Florida town on Thursday defended the town council's decision to fire its city manager after officials learned his wife is an adult film actress.

Fort Myers Beach Mayor Larry Kiker insisted that Scott Janke's termination had nothing to do with his spouse's job, that the town was merely trying to maintain order.

"What we were addressing was a situation where we weren't going to be able to govern the town with all the disruption and interruption," Kiker said.

The plan appears to have backfired.

"I've done over 30 interviews (with media) ... I've gotten hundreds of e-mails, we're getting threatened," Kiker said. "Nobody is getting any work done around here."

Scott Janke appeared alongside his wife this morning on CBS's The Early Show.

On the show, Anabel Janke said she didn't think her husband was being treated fairly.

"When this came out, he talked to the mayor and said, 'I'm willing to resign.' And then everything just..." She then trailed off.

Scott Janke added, "When this story began to break, I was actually called by a local reporter, who also called the mayor about a day before he was going to actually print these articles. And the mayor and I chatted on the phone. Because of my ethics, I said, 'I'm willing to resign with compensation if the town council thinks it will help the community not be so distracted.'" 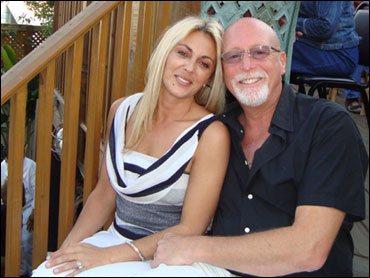 ((AP Photo/Courtesy Scott Janke))
However, the mayor also noted: "It was not his job performance. We all liked Scott ... He's a good guy."

Kiker said he learned of Janke's wife's job after receiving a telephone call from a reporter on Tuesday. He said he then spoke to Janke, who agreed "this was going to be a big disruption for the town and he was not going to be able to do his job well."

Within a few hours, Kiker had called an emergency town council meeting, and the group voted 5-0 to exercise a "no-cause" clause in Janke's contract, effectively firing him.

Councilman Tom Babcock said at a council meeting Wednesday that Janke was fired because his wife's profession brought an inaccurate image to Fort Myers Beach, the News-Press of Fort Myers reported.

"When you become a public figure you are held to a different level of scrutiny and ethics," Babcock said at the meeting.

Janke told The Associated Press on Wednesday night that he and his wife had their "heads held high."

"We have done nothing to be embarrassed about. We've done nothing wrong," Janke said. He said it's too early to think about what's next, and wouldn't comment on any possible legal action.

He will get a severance package worth six months salary, which comes to about $50,000, plus health benefits.

Janke said he married Anabela Mota Janke, who goes by the stage name Jazella Moore, in October. He began working for the town in March 2008.

Dan Miller, editor at the AVN Media Network, which covers the adult industry, said he had not heard of a similar case, but noted the adult film industry is "not necessarily widely accepted" in mainstream American politics.

Diane Duke, executive director of the Free Speech Coalition, a trade association for the adult entertainment industry, said the firing could present legal problems for the town.

Duke said even with a "no-cause" clause in Jenke's contract, as a government employee he is still protected by the First Amendment.

"There may very well be a case here," she said.

Added Howard Simon, executive director of the American Civil Liberties Union of Florida: "His firing may run up against Florida's law that prohibits discrimination based on marital status."

Meanwhile, the issue is the talk of the town of about 6,500.

"Everyone who lives on the island has made comments," said Jaye Duval, owner of the Sole Cafe, who listened to all the gossip as residents gathered for morning coffee and breakfast. "Everybody I've heard has basically thought he should have been able to keep his job. Most people think what his wife does shouldn't matter."

George Noakes, manager of the Sunflower Cafe in town, called it "prejudice."

"I thought the guy was doing a good job. I don't understand why his wife is even an issue," Noakes said. "Whatever she does, that's none of our concern. We shouldn't even be bothered with it."