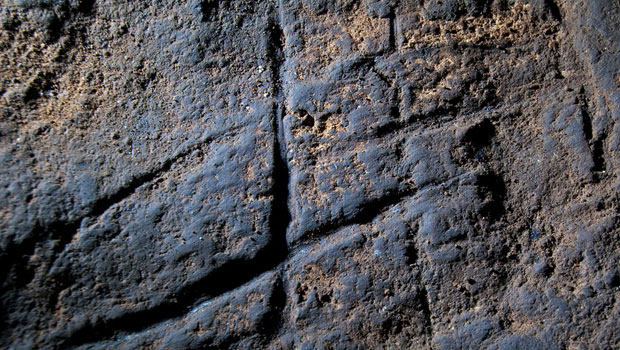 BERLIN - A series of lines scratched into rock in a cave near the southwestern tip of Europe could be proof that Neanderthals were more intelligent and creative than previously thought.

The cross-hatched engravings inside Gorham's Cave in Gibraltar are the first known examples of Neanderthal rock art, according to a team of scientists who studied the site. The find is significant because it indicates that modern humans and their extinct cousins shared the capacity for abstract expression.

The study, released Monday by the journal Proceedings of the National Academy of Sciences, examined grooves in a rock that had been covered with sediment. Archaeologists had previously found artifacts associated with Neanderthal culture in the overlying layer, suggesting that the engravings must be older, said Clive Finlayson, one of the study's authors.

"It is the last nail in the coffin for the hypothesis that Neanderthals were cognitively inferior to modern humans," said Paul Tacon, an expert in rock art at Australia's Griffith University. Tacon, who was not involved in the study, said the research showed that the engravings were made with great effort for ritual purposes, to communicate with others, or both.

"We will never know the meaning the design held for the maker or the Neanderthals who inhabited the cave but the fact that they were marking their territory in this way before modern humans arrived in the region has huge implications for debates about what it is to be human and the origin of art," said Tacon.

Not everyone is convinced: Another recently published study examining the dating of various archaeological sites across Europe raises the possibility that the artifacts may not have been made by Neanderthals but by modern humans. Neanderthals disappeared between 41,030 and 39,260 years ago, while modern humans arrived in Europe about 45,000-43,000 years ago, according to that study, leaving several thousand years of overlap.

"Any discovery that helps improve the public image of Neanderthals is welcome," said Clive Gamble, an archaeologist at the University of Southampton, England. "We know they spoke, lived in large social groups, looked after the sick, buried their dead and were highly successful in the ice age environments of northern latitudes. As a result rock engraving should be entirely within their grasp."

"What is critical, however, is the dating," said Gamble. "While I want Neanderthals to be painting, carving and engraving, I'm reserving judgment."

But Finlayson, who is the director of the heritage division at the Gibraltar Museum, is certain that the artifacts, and therefore the engravings, were made by Neanderthals.

"All European Neanderthal fossil sites from this period, including Devil's Tower Rock Shelter just one mile from Gorham's Cave, have this technology associated," he said in an email. "In contrast no modern human site in Europe has this type of technology. So we are confident that the tools were made by Neanderthals."