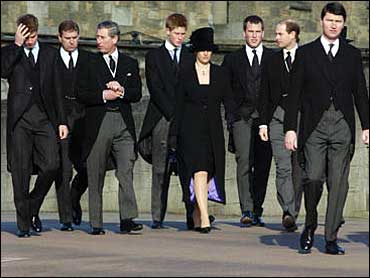 Britain's 101-year-old Queen Mother brushed aside fears for her health Friday to pay a last farewell to her daughter Princess Margaret.

Wearing a black coat and with a white flower in her black hat, she joined Queen Elizabeth and members of the royal family at St George's Chapel in Windsor Castle for a low-key funeral.

The service was private, though a subdued crowd of nearly 3,000 - including a heavy media turnout - gathered outside the gates.

"We think the princess was a forgotten person, really, and we've come here to show the world she's not forgotten," said John Bradford of Windsor, who said he was 71, the same age as Margaret.

Margaret, the queen's younger sister, died after a stroke Saturday at the age of 71.

Some 450 people, including more than 30 royals, attended the afternoon funeral service. The princess's rose-covered coffin was shrouded in her red, blue and gold-colored personal standard.

The 101-year-old Queen Mother, who flew to Windsor by helicopter from the royal estate in Sandringham, attended despite cutting her arm in a fall Wednesday.

She remained in a wheelchair throughout the funeral.

"The one that makes me ache today a lot is the Queen Mother," said Jessie Evans, 79, who was outside the castle. "She has had to come today to say goodbye to her daughter. I think also that the queen will be very, very lonely after today because the Queen Mother won't be long behind her daughter."

Rosemary Grimmett, 57, of nearby Maidenhead, said she was disappointed that the occasion was more subdued than the funeral of Margaret's father.

"I was here 50 years ago as a small child when the king died and I remember the ground being covered with flowers. I was expecting to see the same. I'm a bit disappointed," Grimmett said.

The principal mourners were Margaret's children, Viscount Linley and Lady Sarah Chatto, along with the queen, Prince Philip, Prince Charles and Margaret's former husband, the Earl of Snowdon.

Margaret, whose fun-loving lifestyle defied royal convention, also chose to break with tradition in death by being cremated rather than buried.

The Queen and Margaret's two children watched in silence as the coffin was loaded into the hearse, which was escorted by two kilted bagpipers as it left Windsor Castle and headed for nearby Slough crematorium.

The princess had requested that no members of her family should witness the cremation.

Her ashes will be placed in the chapel, close to the tomb of her beloved father George VI, whose own funeral took place at Windsor exactly 50 years ago.

Margaret Rose Bedford, 71, a former housemaid at Windsor Castle, said she cried when she heard of the princess' death. But she remembered Margaret as a formidable figure.

"She was a very nice, very controlled person, who always had a disdainful expression," Bedford said.

"When I worked in the castle, as a housemaid from 1961 to 1963, you had to look the other way if you came face-to-face wth her on her instructions, or get told off by my boss."

Margaret died just three days after her sister marked the 50th anniversary of her accession to the throne, casting a shadow over the planned Golden Jubilee celebrations.

The 71-year-old princess, high-spirited and unconventional in her youth, had always remained close to the queen despite their different personalities. They and their mother were said to have spoken to one another daily by telephone.

Well-publicized upheavals in Margaret's life did not seem to undermine that closeness.

Margaret's love for Peter Townsend - a divorced man - made headlines around the world. The church objected to a marriage and so did the government at a time when divorce was seen as shameful, and the princess decided not to marry him.

Yet Margaret became the first senior royal to divorce, in 1978, when her 18-year marriage to the Earl of Snowdon - photographer Anthony Armstrong-Jones - was dissolved. The marriage, troubled for some time, came apart after published photos of the princess showed her with Roddy Llewellyn, a man 17 years her junior. The two were romantically linked for half a dozen years.

Margaret did not remarry.

She lived in an apartment at Kensington Palace in London and enjoyed close relationships with her two children, who have no official royal role and have lived quietly and apparently happily outside the limelight.

David, Viscount Linley, is a well-known furniture designer, married and the father of a young son. Lady Sarah Chatto is an artist, married to former actor Daniel Chatto and the mother of two young boys.

It was a day of loss too for the Swedish and Danish royal families, who were attending the funeral in Stockholm of Count Sigvard Bernadotte, uncle of the present king of Sweden, Carl XVI Gustaf, and a distant cousin of Margaret.

Sigvard was the son of another British Princess Margaret, a granddaughter of Queen Victoria, who married the present Swedish king's grandfather, Gustav VI Adolf, at Windsor in 1905.

Sigvard, who died last week aged 94, also fell foul of the royal protocol of the day. He was stripped of his title of prince in 1934 after he married a German commoner, Erika
Patzek.