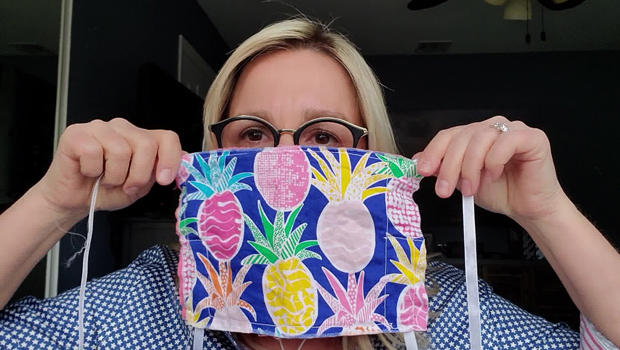 To look at it from across Casco Bay, South Freeport, Maine looks as it always does: quaint and virus-free. But its silent streets and deserted docks tell a different story.

The threat of COVID-19 even here can seem as thick as Maine's famous fog. And yet, the wind has blown in something else, too … generosity.

Bolts of fabric and other materials have been showing up at North Sails, ever since word spread that owner Eric Baldwin was no longer stitching sails, but making masks instead.

Adriane Gibson showed the fabric she was donating: "The Black Watch plaid that's there was for my son's bedroom. And when he saw everything that was going on, and he's only six, and he said, 'Mommy, I think somebody needs it more than I do.'"

Baldwin recalled: "I came into the shop one morning, and there was a Ziploc baggie stuffed in the door with about 20 feet of elastic that someone had in their drawer. And they said, 'We hope you can use this.'"

Baldwin and his partner, Karen Haley, started making masks long before the CDC recommended wearing them. And now, everyone wants to help, including one family that doesn't even know how to sew. According to Haley, "She and her husband and daughter have been cutting out pieces at home. And I drop a bag off and trade another bag out of cut pieces – keeping our social distance."

Meanwhile, in Middletown New Jersey, Sandy Magner started making masks in her spare bedroom, for chemotherapy patients who can't get their life-saving treatments without them.

Correspondent Lee Cowan asked Magner, "And you never sewed anything before?"

"No, no.  Can you see the confidence I had in myself?" she replied.

She had plenty of confidence in her community, too. "I've had some of the strangest people donate money and fabric," Magner said. "Even my ex-husband gave me money for fabric! So, everyone's pitching in."

If defying an epidemic with a needle and thread sounds familiar, it should. Remember the AIDS Memorial Quilt? It helped raise awareness, and a lot of money – a few square feet at a time.

William Hardy is with Carhartt, a company more than a century old that's helped train Red Cross workers to cut fabric for garments, and outfitted our troops during both World Wars.

Cowan asked Hardy, "Do you feel it's a responsibility?"

"World War I, we made the trousers for our soldiers. And we move into World War II, most people don't know we made the jungle suits for the Marines who fought in the Pacific theater."

Now Carhartt is back at it, making some 50,000 gowns and 2.5 million masks, all for a new kind of front line warrior.

"It is emotional for me," Hardy said. "I just, I just think it's our time. I think about the sacrifice of those men and women that we're losing every day, and you know, this is a way to save some of our folks today, and also make those folks proud that gave us the opportunity years and years ago."

For some clothing designers, though, this is brand-new territory.

With retail stores shuttered almost indefinitely, storied brands like Ralph Lauren are galloping to the rescue, too.

When asked how long they will continue making masks, David Lauren, son of Ralph Lauren (and the company's chief branding and innovation officer), said, "Well, we're not going to stop. There's no way to stop. No one wants to stop. So, we'll keep doing this until the problem goes away.

"It didn't matter where you worked in our company and at what level; people came together with so much compassion as so much empathy. We have designers and people in our stores literally started making masks on their own."

"There's so much willpower, and so much good in the world," said Lauren. "Everybody wants to support this, and wants to do it fast."

Even when the outbreak peaks, officials warn the demand for protective equipment will continue. Some wonder if it will ever cease.

Eric Baldwin said, "It just seems like it's gonna be very strange if things, you know, ever get back to normal. What's the new normal going to be?"

Hopefully, it's one that doesn't forget that in the worst of times, the best of us comes out.

Karen Haley said, "If we're helping anybody in the community, or making anybody feel better, by either donating their time or just feeling like they're contributing in some way, I think that makes us all feel better."

Is North Korea quietly grappling with a COVID resurgence?
More