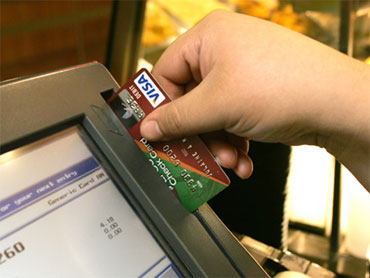 Swipe your debit card at the supermarket and you've placed yourself at the heart of a contentious congressional debate.

On one side are banks like JPMorgan Chase and Bank of America and credit card networks like Visa and MasterCard. On the other are retailers, including giants like Wal-Mart and Target.

At issue: The "swipe" fees banks charge merchants for one of today's most commonplace conveniences. At stake: up to $20 billion in potential bank losses and merchant gains.

For consumers, it could mean lower prices at the local store or restaurant, or it could result in higher bank charges, fewer "rewards" for credit card users or even the imposition of an annual debit card fee.

The fight over plastic has been raging for years - a federal appeals court once called it "a clash of commercial titans." Now it's landed in the middle of a massive financial regulatory bill primarily aimed at restraining Wall Street.

Both sides have unleashed potent, well-heeled lobbying operations. Their efforts will converge on two weeks or more of negotiations between House and Senate lawmakers who are working to blend two separate financial overhaul bills into one.

The Senate bill contains a measure that would require the Federal Reserve to set limits on what fees banks and credit card networks can charge merchants for a debit card payment. The House bill has no such provision.

First, a quick lesson in shopping. A debit card payment taps directly into a customer's bank account and, as such, is akin to writing a check. A credit card payment, on the other hand, is in effect a loan from the bank. One carries more risk than the other. As a result, banks and credit card networks generally charge merchants up to 3 percent for credit card use. For debit card use, the charge to merchants is one-fourth to one-half as much.

Merchants maintain that the fee charged for debit cards, also called an "interchange" fee, is too high. Banks and Visa and MasterCard say the fee takes into account the cost of setting up and maintaining a secure and sophisticated debit payment system.

Last year, $1.21 trillion in purchases were paid with debit cards processed through the Visa and MasterCard networks, generating $19.7 billion in fees paid by merchants, according to data from The Nilson Report, a trade publication. Most of the fees went to banks that issue debit cards.

While the largest banks and the largest retailers have the most dollars riding on the congressional outcome, the two combatants have cast the debate in terms of hurting small community banks and credit unions on one side or small businesses on the other.

The Senate proposal, written by Sen. Dick Durbin, D-Ill., would require the Federal Reserve to set "swipe" fees for debit cards that are "reasonable and proportional" to the cost of processing the transaction. To win votes for it, Durbin exempts banks that have assets of $10 billion or less.

But small banks and credit unions argue they would still be hurt, saying they, too, would have to lower their fees to remain competitive with larger institutions whose fees would be lowered by the Fed.

"Currently, the smallest credit union and the largest bank in the world receive the same interchange fee when their respective customer uses their debit card," Fred Becker, president and chief executive of the National Association of Federal Credit Unions, wrote last week to Fed Chairman Ben Bernanke. "The interchange amendment, however, destroys this equal footing."

Durbin's success in the Senate stunned banks and their lobbyists. Years of lobbying by retailers for limits on credit or debit cards had failed to generate a single House or Senate vote. But banks aren't popular these days and the pressure from home-state retailers tilted the scale. Of the 64 senators who voted for Durbin's proposal, 17 were Republicans - a strong bipartisan signal to lawmakers blending the larger financial regulations bill.

Australia cut credit and debit card fees on merchants by half and debit card holders particularly benefited from the change, according to the Reserve Bank of Australia. But credit card holders saw an increase in their bank fees and a reduction in cardholder rewards, such as fewer points or airline miles. Merchants also started imposing surcharges on some credit card transactions.

Banks and credit card networks warn of similar ill effects in the United States, ranging from higher fees on credit cards to service fees on charge accounts. "We are convinced that fees to consumers would go up and services would be reduced," William Sheedy, group president of the Americas for Visa Inc., said in an interview.

Retailers dismiss that claim as a cynical attempt to sway lawmakers.