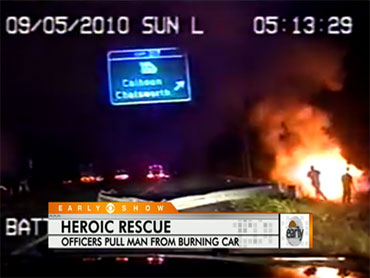 Sunday morning in Gordon County, Ga., a call went in to 911, alerting authorities to a terrible car accident on the interstate.

Phillips said, "When I first arrived, the flames were probably six or seven feet high."

Dan Gloth, 56, was trapped inside his burning car, worried he'd never see his daughters again. His car filled with black smoke, making it impossible to see or breathe. He couldn't kick out the windows.

What Gloth didn't know was that Deputy Phillips, two other officers, and a passerby, were moving quickly in a desperate attempt to save his life.

Each time they put the fire out with extinguishers, it exploded back into flames. The rescue team finally managed to drag Gloth out after smashing the car's passenger window.

Phillips told CBS News, "(It) makes you feel great inside, knowing when you go home -- knowing we saved someone's life."

How did it all happen?

On "The Early Show," Gloth said he believes a trailer truck came into his lane and he moved over, hitting the warning bumps. He told "Early Show" co-anchor Erica Hill he thinks something caught his tire.

"The next thing I knew, I woke up with a car that was burning and filled with smoke," he said.

Gloth, who is going to celebrate his 30th wedding anniversary in November, said his first thought was that he was probably not going to see his family again.

Deputy Jeremy Battle said, in total, they used five fire extinguishers to try to tamp down the blaze.

Deputy Josh Cochran, a rookie officer on his second night on the job, arrived on the scene and worked with a passerby to help pull Gloth out of the car. After they failed with the driver's side window, Cochran said he broke the passenger side window and began to haul Gloth to safety.

Hill remarked, "Your second night on the job and you're saving a life, not too bad!"

Gloth says he's has a few bumps and bruises, but "nothing serious."

In addition to his thanks, Gloth gave each officer a gift.

He explained, "As a child, I have a fond memory of watching a lot of the old cop movies. And I always remember seeing a cop twirling a baton and flipping a coin. So, I wanted to present each of them with a silver dollar to remember that they saved somebody's life."

The three deputies involved in the rescue will be honored at an awards banquet in December.