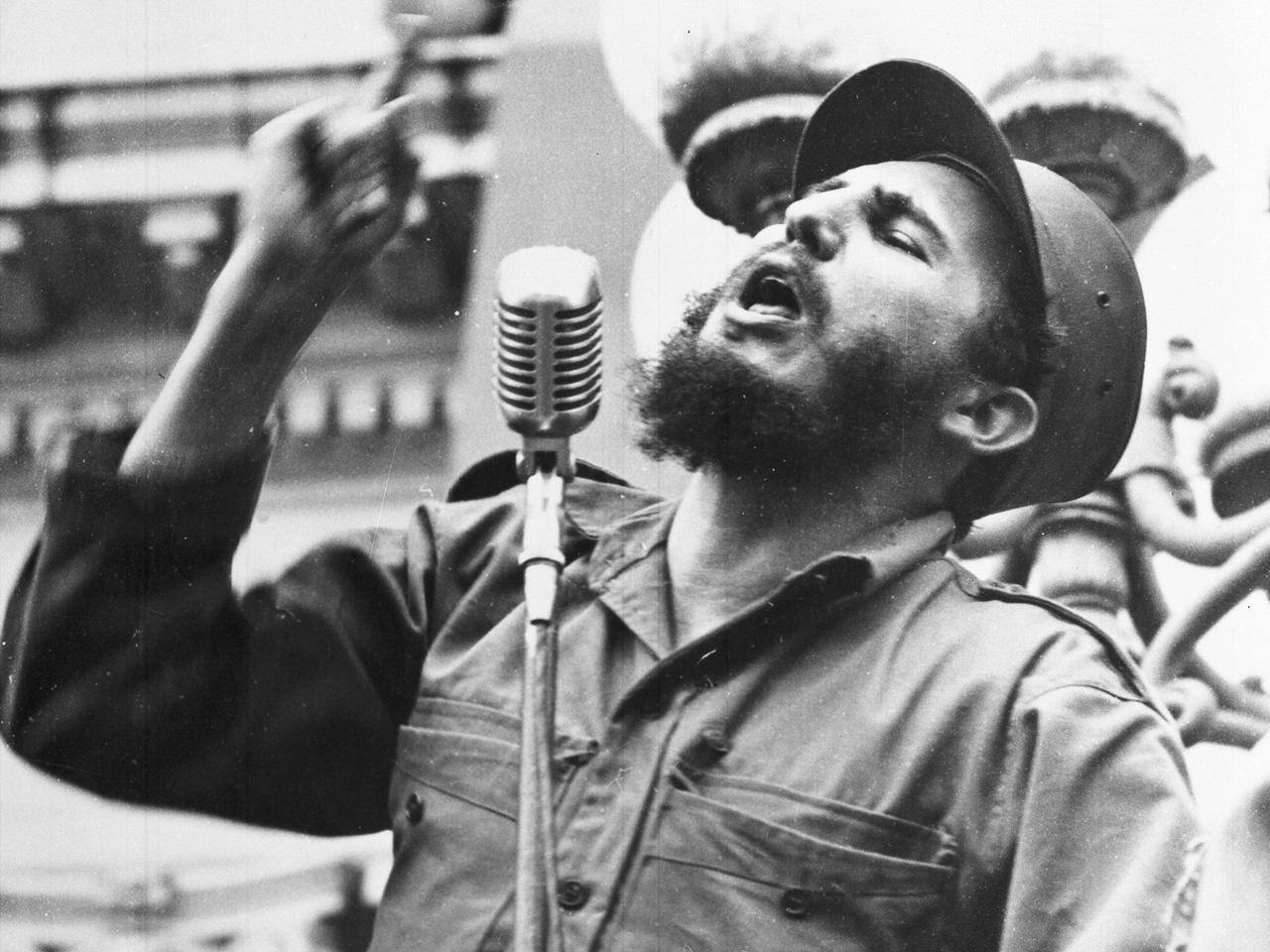 Cuban dictator Fidel Castro died Friday night at the age of 90, but the task of assessing his legacy has barely begun. We begin with a look back at Castro the man, by Martha Teichner, in our Sunday Morning Cover Story:

At first he charmed us. It’s hard to believe now, more than 50 years after the fact. Up in the hills with his rebels, Fidel Castro looked and sounded like a freedom fighter, a romantic hero -- not the bogeyman he became to so many.

“We gladly suffer cold and rain and the hardship of life in the mountain,” he told the media in the 1950s. “This is only the beginning; the last battle will be fought in the capital. You can be sure of it.”

Fidel Castro was born in 1926, one of five children. His family was prosperous and owned a sugar plantation in eastern Cuba. Educated by the Jesuits, he became a lawyer.

The poverty Castro saw around him, the inequality, turned him into a revolutionary.

A month after taking power, interviewed on CBS by Edward R. Murrow, Castro, then 32, said exactly what Americans wanted to hear:

Murrow: “Tell me, Fidel Castro, are you concerned at all about the communist influence in Cuba?”

Castro: “I am not worried, because, really, there is not the threat of communism here in Cuba.”

It’s still not clear whether he changed or whether he lied. But when Castro began executing opponents, when Castro started nationalizing industries and expropriating U.S. property in Cuba, it didn’t matter.

The U.S. response: Sanctions, the economic embargo that exists to this day.

Since the early 1960s, more than a million Cubans have left. Most of them landed in Miami with nothing but their lives -- and the fierce determination to bring Fidel Castro down, one way or another.

In April 1961, an army of Cuban exiles, backed by the CIA, tried to slip into the Bay of Pigs and liberate the island. The invasion was a disastrous and embarrassing failure, with a jubilant Castro playing David to the U.S. Goliath, a role he fine-tuned for the rest of his life, with help from the Soviet Union.

The following year, in 1962, U.S. spy planes spotted the Russians installing nuclear missiles in Cuba. This was the Cold War in our own backyard. Suddenly, Cuba seemed very, very important.

“Castro did not blink,” said Jay Taylor, who represented U.S. interests in Cuba in the 1980s. “It appealed to him to play this role, that he would harbor these missiles that could threaten the great imperial [superpower], that he could do this.

“The world teetered on the edge of a nuclear war. We’re talking about the world -- million, millions dying.”

For a couple of terrifying weeks, President John F. Kennedy and Soviet leader Nikita Khrushchev played chicken, until Khrushchev backed down and the missiles were removed.

But that wasn’t the end of Soviet involvement in Cuba. The Russians pumped something like $5 billion a year into the Cuban economy, propping it up, while the United States kept tightening the screws, toughening its sanctions, with the expectation that, one day, Castro would fall.

The CIA repeatedly plotted to kill him. But still, he hung on -- jailing dissidents, neutralizing political rivals, speaking for hours on end before vast crowds bused in to hear him.

Which brings us to 1980: the Mariel boatlift that year was a huge repudiation of Castro’s claim that Cubans were happy and content. Told they were free to go, 125,000 did, risking their lives, piling onto small boats and makeshift rafts, for the 90-mile crossing to Florida.

“It did hurt his image,” Taylor said. “But in the end, the fact that the United States then had to stop this flow -- having said we would not turn our backs on them, suddenly we did; we said, ‘Turn them back, and stop the boats’ -- that Castro then, I think, felt that he had emerged still, even from that, politically the victor.”

Especially when it became clear that 10,000-15,000 of the refugees he sent our way were insane, or criminals, turned loose from prisons and asylums.

If life in Cuba was bad then, it got worse when the Soviet Union collapsed in 1991. Suddenly, all that Soviet money was gone, along with the oil Cuba received in exchange for sugar. Cubans were literally starving. Anti-Castro interests in the United States thought, surely, the end was in sight.

But in 1993, Fidel Castro, the crafty survivor, did something startling to prop up the Cuban economy: He legalized the U.S. dollar -- which meant that if your relatives in Miami sent you money, you could afford to eat. Today, those payments bring in $3 billion a year.

You name the country: Canada, France, Spain, Mexico, the Netherlands, Israel … everybody but the United States was there, building massive resort hotels and condos for the two million tourists who now visit Cuba every year.

In 1998, when Castro welcomed Pope John Paul II and let the pictures do the talking, the world saw Cuba surviving in spite of the U.S. trade embargo. It was political theater on a grand scale -- the kind Castro loved.

Remember the custody showdown over Elian Gonzalez, the small boy rescued at sea after his mother drowned trying to escape Cuba with him? Castro won; the boy was returned to his father in Cuba.

The revolution does have its supporters, who give Castro credit for raising the literacy rate in Cuba to nearly 100 percent, and for providing free health care to all. Cuba turns out highly-skilled doctors, respected throughout Latin America.

It was Raul Castro who agreed in 2014 to a restoration of diplomatic relations with the U.S. And it was Raul who welcomed President Obama to Cuba in March of this year.

Less than a month later, a frail, faded Fidel Castro appeared at a Communist Party Congress. “Soon, I will be 90 years old,” he said, in what seemed like a farewell address. “Everyone’s turn comes. But the ideas of Cuban Communists will remain.”

He turned 90 on August 13, the day of his last public appearance. But even in death, he remains a bogeyman to some.

“Castro will always be remembered as the Cuban, Latin American revolutionary who stood up to the United States and won,” said Pérez-Stable. “Won in terms of, his health brought him down, not anything that the United States ever did.”

The man the United States tried so hard to topple, tormented 11 American presidents … and died on his own terms.

Castro: The good and the bad

So how will history judge Fidel Castro? Is there good to weigh against the bad?

According to the CIA’s latest factbook, Cuba’s infant mortality rate is 4.5 per 1,000 births. That’s LOWER than the 5.8 per thousand recorded here in the United States.

Average life expectancy in Cuba is 78.7 years -- just a tenth of a year shorter than here.

Weighed against these pluses are the negatives of decades of political oppression.

Though there’s no hard number, political executions by firing squad totaled just over 3,100, according to the non-profit think tank Cuba Archive.