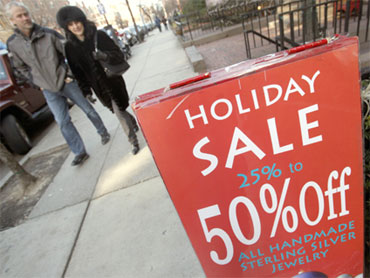 If you were hoping to find massive clearance sales as you finish up your holiday shopping, prepare to be disappointed.

Major stores that had worried it would take across-the-board discounts to lure shoppers are backing away from the panic button. They planned better this year in stocking their merchandise, and Americans are spending a little more than expected.

Sales last week were up 18 percent from the week before, and a little more than 1 percent higher than a year before, according to figures released Wednesday by research firm ShopperTrak.

And because stores didn't load up on merchandise like they did last year before the financial meltdown, they have the luxury of sticking to their original plans for discounts - not desperately slashing prices further as Christmas nears.

"The difference between this year and last year was planning," said Scott Krugman, a spokesman at the National Retail Federation, the world's largest retail trade group, which hasn't changed its forecast for a 1 percent decline in holiday sales. "Retailers had time to plan whereas last year they didn't."

There are plenty of deals to be had, and discounts will probably be deeper this weekend, the last before Christmas, as happens most years. But people waiting for mounds of merchandise with 80 percent discounts - well, they might be left waiting.

That should help fourth-quarter profits as stores find they don't have to drastically slash prices to clear out their stock.

"Stores did a better job in matching supply with demand," said BMO Capital Markets retail analyst John Morris. He added, "Those consumers going out to the malls are very stingy."

For stores, the success of the holiday shopping season depends on the week before Dec. 25, which accounts for about a quarter of holiday sales, according to ShopperTrak, which tracks sales at more than 50,000 outlets.

In fact, the Saturday before Christmas usually rivals the day after Thanksgiving, the traditional start of holiday shopping, in sales volume. The last week "is where the rubber meets the road," said John Long, retail strategist at Kurt Salmon Associates.

And stores have reason for some optimism: Shoppers don't seem as far along in their gift-buying as they were last year at this point, according to both the National Retail Federation and the International Council of Shopping Centers.

Shoppers have stuck to their lists and bought discounted practical items like socks, pajamas and microwaves, though they have opened their wallets for discounted electronics. Online shopping has been another bright spot.

Retailers are pinning hopes on shoppers like Marney Bilodeau, who said she's cramming all her holiday buying in this week and next.

"I haven't felt like it up until now," said Bilodeau, who was at Arizona's Scottsdale Fashion Square last weekend. "I try to budget the rest of the year, so that I can fit in a little bit more around Christmas time."

Some shopping barometers so far:

HOLIDAY SALES AND TRAFFIC: Holiday sales are running about even with a projected 1.6 percent growth forecast, ShopperTrak co-founder Bill Martin said. The ShopperTrak forecast was one of few that predicted gains. Many analysts figured holiday sales would be flat at best.

Last year sales were down 6 percent.

Customer traffic is down about 4 percent compared with last year, which saw a 15 percent plunge. Online, sales from Nov. 1 through Sunday were up 4 percent, comScore Inc. reported.

DISCOUNTING: Stores had planned aggressive discounts in advance for this holiday season. They knew shoppers, worried about tight credit and jobs, would be scouring for deals.

That strategy, combined with tight inventories, has meant that discounting has been similar to that of 2006, before the economy began to sour, according to Dan de Grandpre, editor-in-chief of discount guide dealnews.com.

For example, shoppers found clothing discounted 40 to 50 percent over Thanksgiving weekend. Those deals were scaled back to 20 to 40 percent in the two weeks after. This week, stores are deepening the top discounts to 60 percent and possibly to 70 percent on some items this weekend, he said. But that's typical for the shopping calendar, according to Grandpre.

INVENTORY: With stores cautious about buying for the holiday season, shoppers found some hot items, particularly in toys, in short supply as long as a month ago.

Toys R Us has been the one chain that has consistently received ample shipments of hard-to-find Zhu Zhu Pets, as well as other popular items like Mattel's Barbie Fashionista, though they sell out as soon as they're put on the shelf.

Jim Silver, an analyst at Timetoplaymag.com, reported seeing up to 100 of the season's top toys missing from the shelves at stores like Target and Walmart on a recent visit.

Meanwhile, shortages seem to be cropping up in the shoe departments at various retailers. At Nordstrom's shoe department at New Jersey's Mall at Short Hills, for example, shoe assortments were paltry, based on a visit this past weekend.