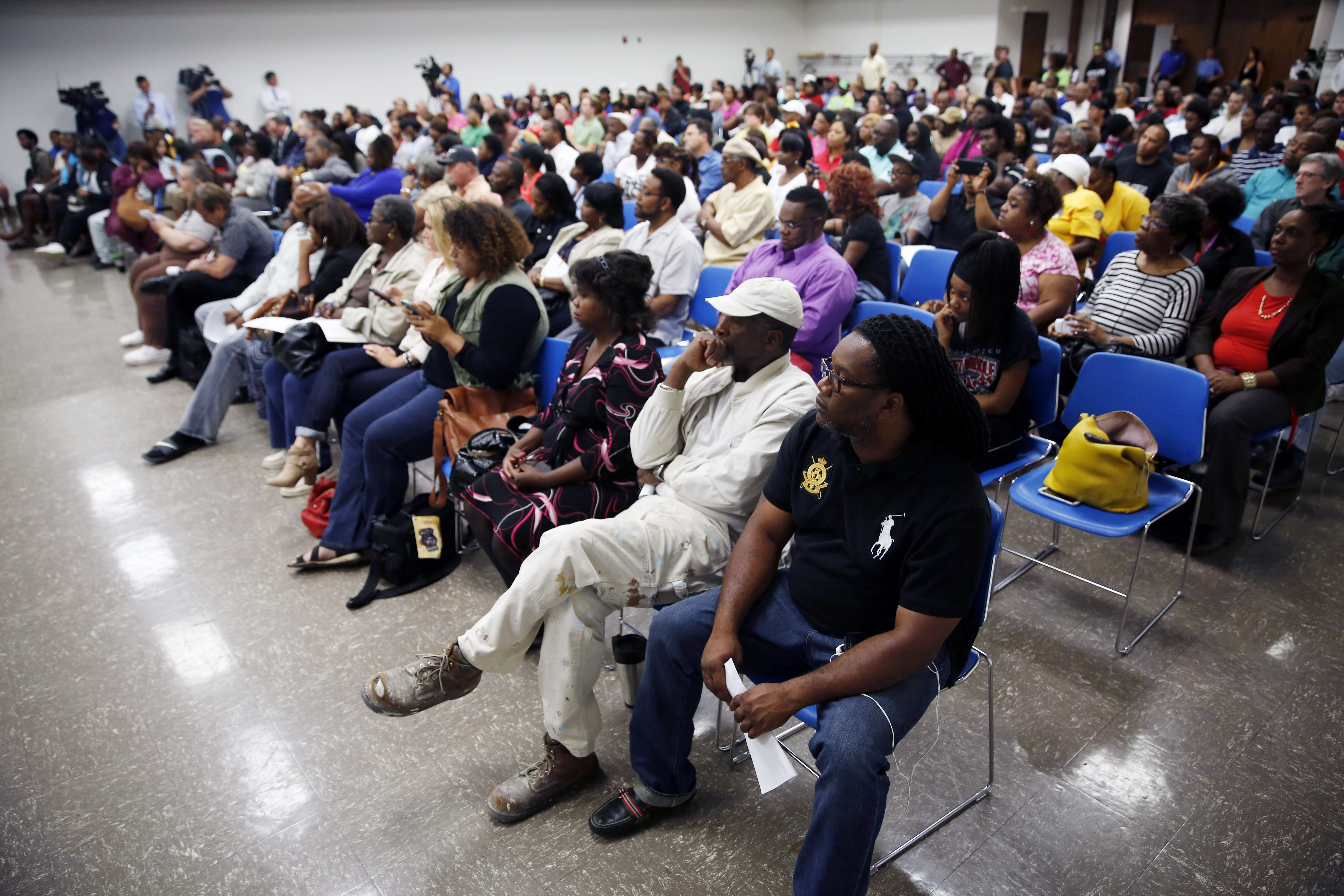 FERGUSON, Mo. -- Department of Justice civil rights investigators have heard one story after another about police harassment and brutality in Ferguson, a suburban St. Louis town where 18-year-old Michael Brown was shot and killed by a white police officer last month.

At least 300 people who live in and near Ferguson crammed into a community college meeting room Wednesday evening to tell investigators about their experiences.

No timetable was offered for completion of the investigation.

There was no public comment period but tables were set up for people to share their concerns privately with investigators. Several said they shared stories of how police too often target black motorists or act too aggressively toward black residents.

The meeting comes on the same day that five people were arrested and two law enforcement officers were hurt in Ferguson after protests over the death of Brown again intensified.

Ferguson was the site of sometimes violent protests and looting in the days after 18-year-old Brown, who was black, was shot by white Ferguson police officer Darren Wilson on Aug. 9.

Missouri Highway Patrol Capt. Ron Johnson said it wasn't clear if a fire at a makeshift memorial for Brown led to the unrest Tuesday night in the St. Louis suburb. Reports of smashed windows and possible arson came hours after the memorial of teddy bears, signs and other items burned.

About 150 protesters gathered late Tuesday night. Johnson, whom Missouri's governor put in charge of security in Ferguson, said Wednesday that one person was arrested for inciting a riot and four others for failure to disperse.

He said one of the two officers hurt was struck with a rock below the eye. He described the other officer's injuries as minor. Meanwhile, the St. Louis County Police Department said one business was vandalized and at least four officers were hit with rocks by the unruly crowd, reports CBS affiliate KMOV in St. Louis.

Windows were smashed at a beauty shop on West Florissant Avenue, where much of the looting happened last month. Johnson said looters also tried to steal a cash register from the shop. A small fire outside a custard shop appeared to be intentionally set, according to fire officials.

Johnson said officers reported seeing gunfire from the protesters but that no one was struck.

One of two memorials at the site where Brown was shot was destroyed in a fire early Tuesday morning. Police are investigating the cause of the blaze, but the fire renewed anger, especially among residents of the apartment community where Brown was killed.

Several people who gathered at the scene Tuesday blamed police for not acting quickly enough to put out the fire. The memorial site was quickly filled, becoming a new, and bigger, memorial.

Resentment lingers among those who question why Wilson hasn't been arrested and remains on paid administrative leave. A state grand jury is weighing whether he should face charges but a decision isn't expected until mid-October.