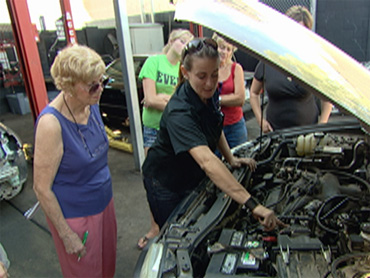 CBS News correspondent Steve Hartman reports on a female auto mechanic whose drive is to teach and empower women about cars.

Aside from a thin coat of powder, there's nothing superficial about 32-year-old Sarah "Bogi" Lateiner.

Big-hearted and brilliant, Bogi graduated Phi Beta Kappa and did it in three years with a double major in pre-law and women's studies. Her plan was to go to law school and become a champion for women on a global scale.

Although in the end, she decided to go with her plan B, instead.

"I had in my mind that this was a different way to save the world," she said.

In other words, fix the world - by fixing cars.

(scroll down to watch the video.)

She enrolled in technical school right after graduation.

"Who doesn't go on to become a mechanic after pre-law?" she said jokingly.

Today, she has her own shop in Phoenix called 180 degree Automotive. Beyond quality service for all, her mission is to educate women specifically about cars and thus empower them in the rest of their lives.

The concept is based on Bogi's first car experience - at 16 she bought an old VW bug that needed a lot of work. She felt like mechanics were taking advantage of her so she learned how to fix it herself. And really, she says, that's what empowered her more than anything.

"I got over my fear of this big piece of metal and plastic that is our cars," she said. "And it became my passion for me to take that empowerment I got from learning about cars to teach it to other women."

To that end, Bogi works weekends teaching basic car maintenance classes. She also started a scholarship for women who want to go on to technical school - and hires mostly women mechanics.

Bogi says she knows from experience, for a woman, getting into law school is easier than breaking into this business.

"When I was applying for jobs," she said, "I literally walked in once and he yelled back, 'Hey, Joe, we got a little girl here wants to be a technician, you've got to see this.'"

Bogi says she knew then that she picked the right path. She's reminded of that almost daily - whether it's a grateful customer bringing in a gift of home-baked bread, or a 77-year-old student breaking loose her first lug bolt.

Bogi says she's more convinced than ever that she is making a difference - and that if you really want to change the world, you better first know how to change your oil.