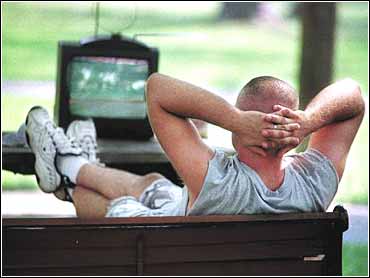 Think of tooth-and-nail competition and you'll probably imagine sports stars giving their all in training camp, startup hopefuls sleeping under their desks or wanna-be tycoons clawing their way to business glory. And what do all of these people have in common? Most of us probably think of them as young and energetic, consigning the graying and middle-aged to a milder existence of contentment, wisdom and appreciation of their blessings.

But according to psychologists we may have it backward. Competition isn't a young person's game and in fact peaks in middle age, a new study reported by the BPS Research Digest finds. Ulrich Mayr, a psychology professor at the University of Oregon, brought science to the mall by asking shoppers to volunteer to participate in a contest of mental arithmetic abilities. Winners received small cash prizes.

In the first round of play, prizes were given for each correct answer. In the second round, cash was only handed out if the participant outperformed a rival. The volunteer math whizzes were then asked to complete a third round, but this time were allowed to choose whether they wanted to compete as they did in the second round or get paid by the answer as in the first.

Although simple arithmetic wouldn't seem likely to get the competitive juices flowing, Mayr and his team discovered that the activity definitely brought out the will to win in plenty of people. Older men in particular were far more likely to opt for the competitive option, says BPS:

You might assume that older men are simply better at mental math due to experience or training in pre-calculator classrooms, but no. "There was no difference in actual performance with age," BPS reports. Nor were the older participants more confident in their mathematical abilities.

Instead, the researchers theorize that older men may have a greater drive for "social dominance." After all, when you're 25, it's generally seen as OK to be low man on the team, but up and coming. By the time we reach the middle of our lives, many of us expect to have attained a certain level of success and therefore feel the need to demonstrate this success through competition.

No wonder parents get so intense about their kids' sports games, quips BPS.

What do you think? Have you gotten more competitive with age?