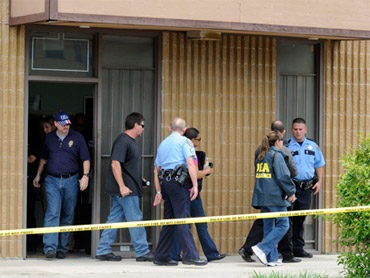 HOUSTON (CBS/AP) Authorities searched the Houston clinic of Michael Jackson's doctor Wednesday, and his attorney said they were seeking evidence of manslaughter.

Dr. Conrad Murray had been interviewed by police as a witness to the pop star's death, but has not been considered a suspect. Police have said little about the probe, neither confirming nor denying the possibility of criminal charges.

Murray has emerged as a central figure in the investigation. The doctor, who had been recently hired by Jackson, was with him in his mansion when he died and tried to revive him.

Los Angeles police and agents with the U.S. Drug Enforcement Administration went through the Armstrong Medical Clinic on Wednesday for about 2 1/2 hours. Authorities said they were searching for documents.

"The search warrant authorized law enforcement to search for and seize items, including documents, they believed constituted evidence of the offense of manslaughter," Ed Chernoff, Murray's attorney, said in a statement posted on his law firm's Web site. The warrant remains sealed and unavailable to the media.

Chernoff said agents left with "a forensic image" of a computer hard drive and 21 documents.

Houston police surrounded the building as the investigators went inside at about 10:30 a.m. DEA spokeswoman Violet Szeleczky said about 20 people were in the Armstrong Medical Clinic, including employees.

A neighborhood crowd gathered to watch the raid until agents left after 1 p.m. and Houston police told reporters and the onlookers to leave the clinic's property.

Szeleczky said the agents were looking for Murray's records, not drugs, but wouldn't specify further. She declined to say how the search related to Jackson's death.

The search of Murray's office hard drive indicates authorities are looking not just for patient records but also for e-mails either between the doctor and Jackson or orders for prescription drugs, said Harland Braun, a prominent Los Angeles defense attorney who has represented doctors in cases involving administration of drugs.

Meanwhile, investigators in California also sought more information from Murray, according to Chernoff.

In a statement on his site late Tuesday, Chernoff said investigators from the Los Angeles County coroner's office have asked for medical records in addition to those already provided by Murray.

"The coroner wants to clear up the cause of death; we share that goal," Chernoff said in his statement. "Based on Dr. Murray's minute-by-minute and item-by-item description of Michael Jackson's last days, he should not be a target of criminal charges."

It's still not known what caused Jackson's death at age 50. The pop star went into cardiac arrest in his bedroom and Murray tried to resuscitate him while an ambulance was called, according to Murray's lawyers.

An autopsy was conducted but results are not expected until next week. The Jackson family had a second autopsy performed and those results also are pending.

Braun said of Wednesday's raid in Houston that by stating they are investigating what they believe is manslaughter, authorities don't need to worry about patient-doctor confidentiality — the right doesn't exist in criminal cases.

To prove a charge of manslaughter, authorities must prove there was a reckless action that created a risk of death or great bodily injury. If a doctor is aware of the risk, there might also be an issue of whether the patient was made aware of that risk and decided to take it. A patient's complicity in taking the risk could reduce the doctor's culpability, Braun said.

Investigators have found the powerful anesthetic propofol in Jackson's home, according to a person with knowledge of the investigation. The person is not authorized to speak publicly and requested anonymity. The officials are working with the Drug Enforcement Administration and California attorney general's office to determine how the medications got there.

Police detectives have already spoken to Murray twice — once immediately after the singer's death and again two days later. Police investigators say Murray is cooperating in their investigation. The Las Vegas-based doctor is also licensed in California, Nevada and Texas.

Sevcik, Chernoff's spokeswoman, said the interview with coroner's investigators might happen Friday. Murray is currently in Las Vegas and Chernoff would be speaking to investigators without the doctor being present.

There was no sign of activity Wednesday at Murray's medical offices in Las Vegas. Doors were locked and curtains drawn at his practice, Global Cardiovascular Associates.

There was no immediate record of a search warrant for Murray's medical office or his Las Vegas home, said Esther McElhaney, a Las Vegas court spokeswoman.

But she said police would have 10 days to provide a report to a judge in Las Vegas Justice Court about any items or documents seized if they had searched either location recently.

The DEA has assisted in probes into other celebrity deaths, including the 2007 overdose death of Anna Nicole Smith as well as that of actor Heath Ledger.

Jean Rosenbluth, a University of Southern California law professor, says the agency's involvement in the Jackson case suggests authorities are looking into whether drugs came from out of state.

Federal drug regulations include controls over whether and how frequently a doctor can write prescriptions over the phone, and DEA agents could be looking to see if these rules were broken, Rosenbluth said.