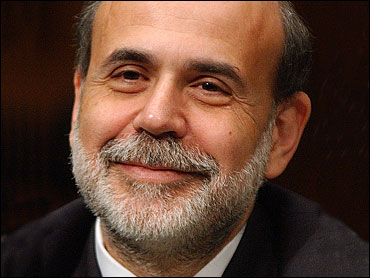 Federal Reserve Chairman Ben Bernanke told Congress on Thursday that the once high-flying housing market appears to be staging a safe landing.

"The downturn in the housing market so far appears to be orderly," he said during a hearing before the House Financial Services Committee.

After five straight years of booming activity, the housing market is slowing as mortgage rates rise and still-high home prices make it difficult for some people to buy.

One of the things that Bernanke and his Fed colleagues are keeping close tabs on is the extent to which a housing slowdown will put a damper on overall economic activity.

"We recognize the risk ... and we are watching it very carefully," he said. Bernanke's appearance was the second in as many days as he gives Congress a semiannual review of the economy. On Wednesday, Bernanke told senators he believes the slowing economy will help keep inflation in check.

The housing market has been a top economic performer. This sector of the economy has racked up record-high sales five years in a row. Rapid appreciation in house prices has made homeowners feel wealthy and has powered consumer spending, helping the economy move solidly ahead.

But the cooling of the housing market is expected to contribute to a slower pace of general business growth across America in the coming months.

The economy, which grew in the first quarter of this year at a 5.6 percent pace, the fastest in 2½ years, is expected to slow to a pace of around 3 percent or less in the second half of this year.

"The increase in energy prices is clearly making the economy worse off both in terms of real activity and in terms of inflation," he said. "There is no question about it."

Oil prices, which hit a new record high of $77.03 a barrel last Friday, have retreated and are currently hovering above $72 a barrel. If oil prices were to rise another $10 or $15 a barrel, there would be "significant consequences" for the economy, the Fed chairman added.

On other matters, Bernanke expressed confidence that the country's resilient economy could withstand any jolt that could come from another natural disaster, such as last year's Gulf Coast hurricanes. But any such disaster would pose a burden on the nation's coffers. "There is no free lunch," he said.

Bernanke again raised concerns about a legal provision that lets companies own a certain kind of bank, including one that Wal-Mart Stores Inc. wants to operate in Utah.

The Fed chief's comments, which didn't mention Wal-Mart specifically, are aimed at an exemption in federal law that allows companies to own such banks, called industrial loan companies.

"It is a good idea to try to keep some separation between banking and commerce," he said.

Talking about workers' issues, Bernanke said that he expected U.S. workers' inflation-adjusted wages to rise in the coming quarters without necessarily causing an inflation problem. Last year, most workers' paychecks trailed inflation, putting a strain on some families' budgets.

On hedge funds, he said that market discipline, rather than new regulation, is the best way to police the activities of hedge funds.

Rising oil and other prices remain a concern but Bernanke said Wednesday that the Fed is counting on moderating economic activity to get inflation under control.

That assessment, delivered first to the Senate Banking Committee, raised hopes on Wall Street that a respite from two years of interest rate pain may be in sight. That propelled the Dow Jones industrial by more than 200 points.

Although Bernanke waxed on about inflation risks, he also struck an encouraging note that the expectation of slower, but still healthy, economic growth will act as a force to blunt inflation pressures.

"Should that moderation occur as anticipated, it should help to limit inflation pressures over time," Bernanke told the senators.

Fed watchers had hoped that Bernanke, a respected economist and former economics professor with a reputation for speaking plainly, would put an end to the Delphic discourse that came out of the Fed under his predecessor, Alan Greenspan. However, Bernanke's communications with Wall Street and Main Street have been bumpy at times, particularly when he sent contradictory signals early on about where interest rates might be heading.

Bernanke, in his testimony, sought to strike a more balanced tone about the risk of inflation and other forces in the economy that could restrain prices from taking off.

The Fed has pushed up interest rates 17 times since June 2004 to fend off inflation. The Fed's next meeting is Aug. 8 and hopes are rising among investors and economists that the Fed might take a break in its rate-raising campaign at that time to assess economic activity.

Bernanke acknowledged to lawmakers that it's a difficult time for the Fed. If it pushes rates too high, it could cripple the economy. If it takes a breather too soon, inflation could strengthen its grip.