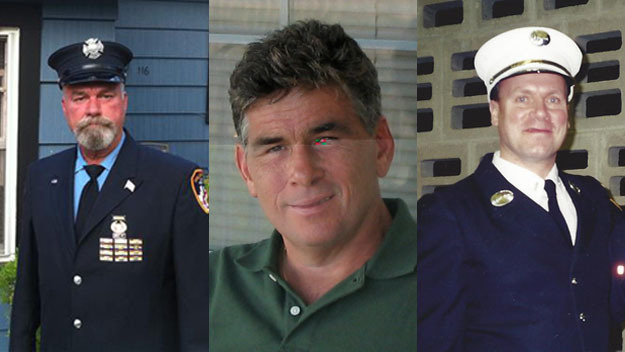 Lt. Howard Bischoff and firefighters Robert Leaver and Daniel Heglund died within hours of each other on Monday.

Their deaths are "a painful reminder that 13 years later we continue to pay a terrible price for the department's heroic efforts," Fire Commissioner Daniel Nigro said in a statement.

The three were among thousands who aided in the rescue and recovery effort at ground zero after the attacks on the World Trade Center.

"On that day when first responders arrived, the air was toxic and remained toxic for many months afterward," said Jake Lemonda, president of the Uniformed Fire Officers Association.

Heglund spent 21 years with the FDNY and died just one day before his 59th birthday, CBS New York reports. Bischoff and Leaver grew up together in Brooklyn and were childhood friends. Bischoff served 19 years with the department while Leaver served 20.

The Fire Department of New York lost 343 firefighters on 9/11. Many more are battling illnesses believed to stem from the contaminated air at the site.

The three deaths Monday raise to 92 the number of firefighters who died of illnesses directly related to the search for survivors. Their deaths come as advocates are urging Congress to reauthorize the James Zadroga 9/11 Health and Compensation Act, which provides medical treatment and compensation to those who got sick because of exposure to toxic air after Sept. 11.

The legislation is named for an NYPD detective who died after working at ground zero.

Fire officials knew the three were sick, said Lemonda, whose union represents fire lieutenants, captains, battalion chiefs, deputy chiefs, medical officers and supervising fire marshals in the FDNY. One had leukemia, one had esophageal cancer and the third had colon cancer.

"The numbers are spiking," Lemonda said. "We have over 850 firefighters and fire officers, active or retired, who have been diagnosed with 9/11-related illnesses."

Funerals for Leaver, 56, and Heglund, 58, were scheduled for Friday. The service for Leaver will be held at Francis of Assisi Church in West Nyack at 10 a.m. Heglund's funeral will be at the Centerport Volunteer Firehouse at 10:30 a.m.

A funeral for Bischoff, 58, will be held at 11 a.m. Saturday at St. Aloysius Church in Jackson, N.J.