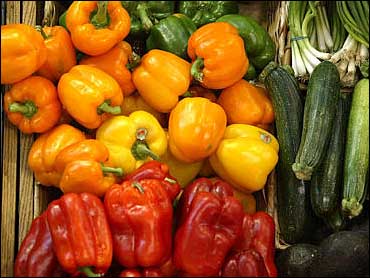 The days of peeling pesky stickers off apples and tomatoes may soon be over. A Georgia company is seeking federal approval for a laser that etches indelible but edible labels onto the skins of fruits and vegetables.

The laser device could tag onions, cucumbers, kiwis, pears — all manner of produce — according to Durand-Wayland Inc. The company wants federal regulations amended to allow it, the Food and Drug Administration said Wednesday.

The etched logos would be an alternative to the stickers that now mark most fruits and vegetables sold in the United States, though it's not clear they'd be to consumers' liking. The stickers most commonly bear a standard code, called a produce look-up or PLU code, used to ring up fruits and vegetables at the register. They also can include brand names, logos and country of origin information.

"I don't like it. I don't want my fruit lasered. I'll take a sticker over a laser. The less tampering with fruit, the better," said consumer Ellen Hamilton, 41, of Alexandria, Va., when told about the technology.

Durand-Wayland, a LaGrange, Ga., manufacturer of spraying, packing and labeling machinery, wanted to start selling the $38,000 lasers two years ago, but the FDA told it to hold off until it could show they were safe. Any source of radiation, including the light of a laser, used to treat or process food is considered a food additive.

Durand-Wayland President Fred Durand III said they delivered the agency a three-inch-thick petition with the results of tests that show the technology is safe. The FDA has 180 days to review the findings, filed March 5.

The FDA designated it for expedited review since the technology could improve the agency's ability to track and trace produce in an outbreak of foodborne disease, said Andy Zajac, who oversees petition review in the FDA's office of food additive safety. The difficulty of tracing tainted produce back to its source has hampered investigations of past outbreaks, including salmonella linked to tomatoes.

Still, the regulatory agency worries the etching could allow germs to penetrate treated produce — a concern noted by Sinclair Systems International LLC, the largest manufacturer of stickers used to mark fruit. The FDA also wants to know whether the laser affects the fruit or vegetable, including how it compares to cooking. Tests results submitted by the company are now under FDA review.

The laser works by vaporizing the top layer of skin from produce, exposing the typically lighter layers underneath. That contrast allows the laser etching to stand out. It works well with fruit like peaches, plums and nectarines, but not with cantaloupes (too lumpy) or brown potatoes (insufficient contrast).

The lasers can etch 14 items a second, said Durand, who touts the technology as cheaper and more convenient than stickers.

"Stickers are just more expensive all around. With laser, it's just light. It doesn't leave any mess. There's no labor. No inventory. No cleanup," Durand said.

A spokeswoman for the Produce Marketing Association called the technology intriguing.

"The industry is always looking for the best — whatever will make things better and easier," said Kathy Means, a spokeswoman for the industry group, who said it should go ahead if there are no safety concerns.

The Association estimates 60 percent of the most commonly sold fruits and vegetables are already labeled for origin, either by country or region, typically with stickers or tags. Such labeling is voluntary now. The 2002 Farm Act made country-of-origin labeling mandatory for seafood, meat and produce, but the requirement is on hold until September 2008 for the latter two foods.

Southern Oregon Sales, a Medford, Ore. grower cooperative, used the Durand-Wayland laser etcher on a trial basis last year, tagging between 2,000 and 3,000 cases of fruit. Sales manager Dave Bryan said he figures the machine could pay for itself in five years, all while eliminating consumer sticker frustration and improving produce safety.

"The sticker can always be removed, whereas this is etched on the piece of fruit. So you can go back to the shipper, the packer and the field," Bryan said. "From a food safety standpoint, it's huge. That's one of the biggest selling points."

Sinclair Systems has watched the technology, but is sticking to stickers. Fran Garcia, the Fresno, Calif. company's vice president of global sales and marketing, said advanced bar code technology, like the DataBar that packs more information into a smaller space, will keep demand for stickers high.

Durand said test results should put all fears to rest.

"The results were very positive, so no problems at all," he said.

That may not sway consumer Autumn Majack, 33. The Milton, Wash. resident prefers her fruit free of all labels, whether laser etched or stuck on.

"You know what you're buying. Not unless you have five or six different species of banana, it's OK — no problem," Majack said.

CEO who posted crying selfie about layoffs responds to backlash
Thanks for reading CBS NEWS.
Create your free account or log in
for more features.
View CBS News In
CBS News App Open
Chrome Safari Continue
Be the first to know
Get browser notifications for breaking news, live events, and exclusive reporting.