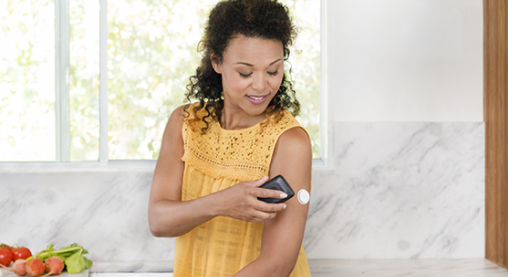 Current models require users to test a drop of blood twice daily to calibrate, or adjust, the monitor.

The pain of finger sticks and the cost of testing supplies discourage many people from keeping close tabs on their blood sugar, which is needed to manage insulin use and adjust what they eat.

Abbott's new FreeStyle Libre Flash Glucose Monitoring System, approved Wednesday by the Food and Drug Administration, uses a small sensor attached to the upper arm. Patients wave a reader device over it to see the current blood sugar level and changes over the past eight hours.

Most of the 30 million Americans with diabetes use standard glucose meters, which require multiple finger pricks each day and only show current sugar level. More-accurate continuous glucose monitoring devices are used by about 345,000 Americans.

But most don't do the finger pricks to calibrate them and may get inaccurate readings, said Dr. Timothy Bailey, who helped test FreeStyle Libre.

Abbott's device was approved for adults with Type 1 or Type 2 diabetes and should be available in pharmacies within months. The company, based near Chicago, did not disclose the price of the reader or the sensors.

Abbott's system can't be used with an insulin pump, a device worn against the skin that allows users to inject insulin as needed, but the company is planning improvements to eventually enable that.

"The pros of the new device are that it is a 10-day wear, it is low-profile and that no calibration needed," said Dr. Carol Levy, director of the Mount Sinai Diabetes Center in New York City. "The  cons of the device are that is has no alerts for either high or low BG levels for patients with hypo-unawareness, which could be a challenge. It also requires a separate receiver to view data -- other systems on the market can have data viewed on the smart phone."

Rival Medtronic this spring launched a device in which the insulin pump automatically responds to blood sugar changes recorded by the sensor and either withholds or injects insulin as needed.