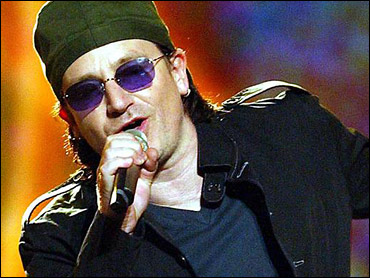 Federal regulators continued their crackdown on indecency Thursday, ruling that an expletive uttered by rock singer Bono on NBC television violated broadcast standards and issuing a fine for a broadcast of the Howard Stern radio show.

The FCC also overruled its staff and said that Bono's expletive during the 2003 Golden Globe Awards program was indecent and profane, but issued no fine.

The FCC also proposed fining a subsidiary of Clear Channel Communications $55,000 for a broadcast on two Florida radio stations during which the host conducted an interview with a couple allegedly having sex.

The fines are the latest in a stepped-up campaign by the FCC to crack down on indecency. Critics have said the commission failed to aggressively enforce rules, leading to a coarsening of the airwaves.

The FCC received hundreds of complaints about the Golden Globes broadcast after Bono, the lead singer of the Irish rock group U2, said, "This is really, really, f------ brilliant."

The enforcement bureau said last October that Bono's comment was not indecent or obscene because he did not use the word to describe a sexual act. "The performer used the word ... as an adjective or expletive to emphasize an exclamation," the bureau said.

To avoid a repeat incident, NBC aired this year's Golden Globes broadcast on a 10-second delay. ABC did the same with its telecast of the Academy Awards show.

Steve Jobs at the heavenly gates - there's an app for that