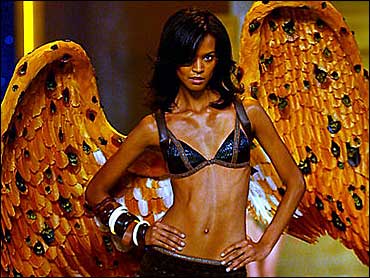 Scenes from network TV: A teenage boy fumbles with a girl's sweater until a teacher interrupts them in "Boston Public." A mother complains about a student newspaper column dealing with unusual sexual techniques.

A male character is seen lying nude on a diving board at an indoor swimming pool, using only his left hand to cover his private parts and trying to entice Amy on "Judging Amy" to go skinny-dipping with him.

Despite the spread of parental controls and ratings, television has its racy moments, and Federal Communications Commissioner Michael J. Copps says too many of them are getting on the airwaves.

"Too many indecency complaints from consumers and too many truly indecent broadcasts are falling through the cracks," he said Thursday, citing concerns about children being exposed to such material.

ABC broadcast the first version of "Victoria's Secret Fashion Show" a year ago, prompting an investigation by the FCC, which ruled it did not violate decency standards.

Alex Johns, Copps' spokeswoman, said the timing of his remarks was unrelated to the "Victoria's Secret" broadcast. "These are ideas that have been brewing. He's been pretty clear where he stands on indecency," she said.

Copps, who was appointed by President Bush, is the only Democrat currently on the FCC.

In a statement, CBS said, "We are confident that the Victoria's Secret special was completely within acceptable boundaries for broadcast television."

"Victoria's Secret" ranked third in the overnight ratings for 9-10 p.m. Wednesday, behind ABC's "The Bachelor" and NBC's "The West Wing."

Copps said of the nearly 500 indecency complaints received by the FCC's enforcement bureau in the past year, only a tiny number have resulted in any action. "If our definition leads to that result, then our current definition of indecency just isn't getting the job done," he said.

The bar needs to be raised on broadcasters wanting to air violence, sexual content and strong language, according to the Los Angeles-based Parents Television Council, which cited the "Judging Amy" and "Boston Public" episodes mentioned above.

The FCC's enforcement bureau had no comment on Copps' comments — only that the bureau strictly enforces the FCC's definition of indecency. It also said FCC rules are reviewed and changed as the industry changes, or as warranted.

Representatives of the three major TV networks did not return calls seeking comment.

As defined by the FCC, indecency is any "language or material that, in context, depicts or describes, in terms patently offensive as measured by contemporary community standards for the broadcast medium, sexual or excretory organs or activities."

Indecent programming can't be banned entirely because of First Amendment protections. It may, however, be restricted in order to avoid its broadcast during times of day when there is reasonable risk that children may be in the audience — from 6 a.m. to 10 p.m.

Last November, ABC pushed the standards envelope twice in different directions. Besides the Victoria's Secret show, it aired an uncut version of the movie, "Saving Private Ryan," with its violent opening scene of the D-Day invasion.

In 2000, a controversial Nike ad was pulled by NBC after hundreds of viewers and the National Organization for Women complained about its depiction of a woman chased by a man wielding a chain saw.

"Compelling arguments have been made that excessive violence is every bit as indecent, profane and obscene as anything else that's broadcast," said Copps, who asked for a review of violence on the airwaves.

Copps also called for a review of the potential correlation between indecency and media consolidation.