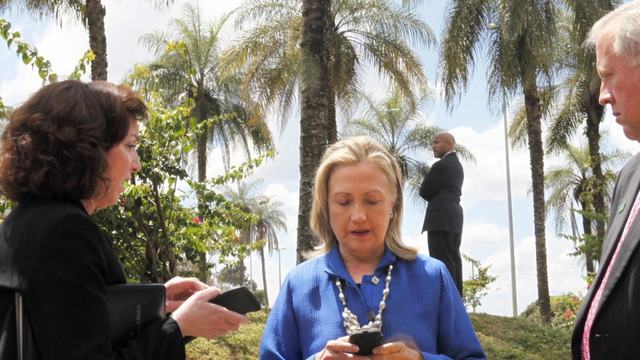 The FBI made public Friday afternoon dozens of pages of its investigation into whether former Secretary of State Hillary Clinton improperly handled classified information with her use of a private email server during her time in President Obama’s cabinet.

The FBI, responding to numerous Freedom of Information Act (FOIA) requests, released a summary of Clinton’s July 2 interview with the FBI, along with other documents related to the case.

The 58 pages of documents include notes from interviews with Clinton’s various State Department aides, as well as details about how the server was set up in the basement of Clinton’s New York home. Several pages remain completely blank or otherwise contain heavy redactions.

The investigation documents also note that there were up to 13 different devices from which Hillary Clinton accessed her email, eight of which were used by her while she was secretary of state. But the FBI was unable to examine the devices since her lawyers at Williams & Connolly were “unable to locate any of these devices,” according to the FBI release. One aide, Justin Cooper, told the FBI that he “did recall two instances where he destroyed Clinton’s old mobile devices by breaking them in half or hitting them with a hammer,” according to the documents.

The agency noted that Clinton -- when she contacted former Secretary of State Colin Powell, who also used a BlackBerry and private email during his tenure as America’s top diplomat -- was advised to “be very careful” in January of 2009.

In Powell’s email reply, he said: “I got around it all by not saying much and not using systems that captured the data.” He also warned Clinton that “if it became ‘public’ that Clinton had a BlackBerry, and she used it to ‘do business,’ her emails could become ‘official record[s] and subject to the law.’” Clinton “stated Powell’s comments did not factor into her decision to use a personal e-mail account.”

Clinton told the FBI that she did not recall receiving any emails she thought should not be on an unclassified system. She relied on State officials to use their judgment when emailing her and could not recall anyone raising concerns with her regarding the sensitivity of the information she received at her email address.

In the same document describing Clinton’s interview with the FBI, the agency noted that Clinton had “suffered a concussion” in December of 2012, and then “around the New Year had a blood clot.”

“Based on her doctor’s advice, she could only work at State for a few hours a day and could not recall every briefing she received,” the agency noted.

The former secretary also said she did not remember any guidance from the State Department regarding email policies, nor could she recall any briefing or training related to the retention of federal records or handling of classified information. When asked in her FBI interview what she made of email chains containing “(C)“ markings in the body of the text -- indicating the presence of information classified at the confidential level -- Clinton said she did not know what the “(C)“ meant. Instead, according to the FBI documents, she “speculated it was referencing paragraphs marked in alphabetical order.”

Based on her practice of emailing staff on their official State Department email accounts, Clinton assumed her communications were captured by State systems. According to the documents, the Democratic nominee specifically denied that the use of a private server was due to a desire to avoid FOIA requests or violate the Federal Records Act.

Still, the FBI records showed aides did, in fact, purposely delete content from their accounts.

Two State Department aides requested that emails from July and September of 2014 be wiped from their laptops. Another aide, whose name is redacted in the FBI files, used a program called BleachBit to “delete the e-mail-related filed so they could not be recovered.” A footnote on the FBI document noted that BleachBit is “open source software that allows users to ‘shred’ files, clear Internet history, delete system and temporary files and wipe free space on a hard drive.”

After over a year investigating Clinton’s server, FBI director James Comey did not recommend any criminal charges to be filed against the Democratic presidential candidate.

Comey noted, however, that Clinton and here colleagues were “extremely careless” in their handling of classified information.

“We are pleased that the FBI has released the materials from Hillary Clinton’s interview, as we had requested,” Fallon said. “While her use of a single email account was clearly a mistake and she has taken responsibility for it, these materials make clear why the Justice Department believed there was no basis to move forward with this case.”

House Speaker Paul Ryan, R-Wisconsin, blasted Clinton as “reckless” following the FBI release of the documents, reiterating again his call for the Democratic nominee to be denied access to classified briefings during the election cycle.

“These documents demonstrate Hillary Clinton’s reckless and downright dangerous handling of classified information during her tenure as secretary of state,” Ryan wrote in a statement. “They also cast further doubt on the Justice Department’s decision to avoid prosecuting what is a clear violation of the law.”

Top Democratic Rep. Elijah Cummings of Maryland also weighed in on the FBI document release, praising the agency but also encouraging the department to release other documents from their investigation.

“I am disappointed that it did not release all of the documents together, including documents relating to dozens of other senior officials who authored and sent emails that have now been deemed classified when they were sent,” Cummings said, specifically pointing to the Powell-Clinton email exchanges. “Even with this limited production, however, the documents made public today demonstrate that our nation’s classification system is fundamentally broken and in desperate need of reform.”

Democrats on the House Committee on Oversight and Government Reform, on which Cummings serves as the ranking member, also pressed Secretary of State John Kerry to release the Powell emails in question, invoking in a letter the “Seven Member Rule” to obtain full, unredacted copies of their exchanges.