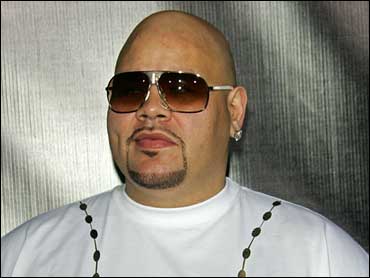 Rapper Fat Joe may have witnessed a fatal shooting outside a popular South Beach restaurant and police want to talk with him, authorities said Wednesday.

"If he's a witness, we'd love to speak with him," Hernandez said.

Lessli Paz, 25, of New York, was shot once and died at the scene. Homestead, Fla., resident Joey Navarro, 26, was hit three times and died shortly after being taken to a hospital.

Police arrested Miami resident Jermaine Chamberline, 24, on charges of second-degree murder and possession of a firearm by a convicted felon. He was taken into custody Monday afternoon and was jailed without bond.

Chamberline shot Paz and Navarro when a "verbal altercation" between two groups escalated into punching and kicking, according to a police report.

"They were walking through the parking lot, and we don't know exactly what was said, but it wasn't interpreted right by either of the parties," Hernandez said.

Fat Joe has spent more than a decade making rap records and gaining mainstream success by pairing up with R&B stars.

Miami Beach draws large crowds of hip-hop music fans for concerts and other events over the Memorial Day weekend. More than 700 people were arrested over the long holiday weekend, Hernandez said. More than 1,000 were arrested during the same weekend last year, mostly for misdemeanors.