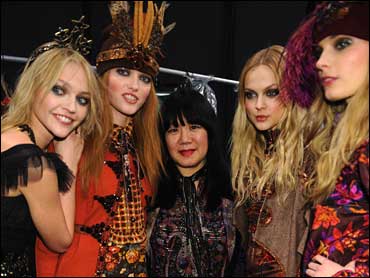 Anna Sui has become a fashion legend who manages to stay on the cutting edge year after year. Rita Braver takes us to her workshop:

"To me, fashion is like a mirror," says designer Anna Sui. "It's a reflection of the times. And if it doesn't reflect the times, it's not fashion. Because people aren't gonna be wearing it."

And after almost 30 years of creating new collections, Sui is always trying to find new ways to entice her fan base.

"I think whenever people talk about the 'Anna Sui woman,' they're talking about someone that's probably kind of more downtown, and there's always like this ambiguity: Is she a good girl, or a bad girl?"

Sui's clothes - sexy, flirty and innocent at the same time - attract celebrities like director Sofia Coppolla, the young stars of the hit series "Gossip Girls," and Paris Hilton, who was wearing one of her designs on the red carpet right before she went to jail.

"Yeah, trying to look real lady-like," Sui said. "And I thought she looked fantastic in it. It was kind of a cocktail-looking dress, too."

But Sui says she really creates her collections with everyday people in mind:

"I like to see when they wear the old stuff, too, because then I know that it has, like, longevity, and that it means something to them."

"You are kind of known for making moderately-priced clothing," Braver said. "What's the price range of your pieces?"

Sui's personal closets, decorated to the hilt, are a living history of her work:

"This was from my kind of Americana collection," she described one piece, "and of course the American took on kind of a hippie sort of look."

She showed off a floral print, and a simulated tie-dye which she called "a fun one to do."

The decor of her personal space is reflected in her flagship New York shop.

"When everybody saw my boutique, then they thought, 'Okay, it's a whole world,' and that I think is what helped me kind of brand myself."

Her clothes are carried by other U.S. stores as well, but this is the prototype for 42 franchised shops in Asia and the Middle East. She's also licensed a line of accessories and beauty and fragrance products with her signature packaging, resulting in a company with estimated annual sales of around $20 million.

"It's kind of a dream come true, because to me fashion is not just the clothes, it's all the accoutrements that go with it," Sui said.

She was even asked to design a custom Barbie doll, and her work draws praise from everywhere.

Sui, who is single and jokes that she's too busy to get married, is part of an extended Chinese family that comes out in force for her New York fashion shows.

Today she's proud to be part of a small group of Chinese-American designers that now includes Vera Wang, famous for her wedding gowns, and Jason Wu, who created Michelle Obama's inaugural gown. But as a kid, Sui never doubted she could go all the way …

"At the point when I wanted to become a designer, I didn't think about, 'Oh, but I'm a woman,' just like didn't think about like, well, 'I'm Chinese' or that "I'm in Michigan.' You know, none of those things were obstacles to me. I just had this idea that this is what I had to do."

Still, Sui says that when she first told her immigrant mom and dad about her interest in a fashion career, they said, "Why do you want to be a dress maker when you could be a doctor?

"But I was determined," she said.

She got into New York's prestigious Parsons School of Design, but soon dropped out to work in fashion houses and on style shoots for a classmate, now famed fashion photographer Steven Meisel. Then Sui decided to show a few of her own pieces at a trade show:

"And someone from Macy's just came along and saw the stuff, and said, 'We want it?'" asked Braver.

"Yeah, and I couldn't believe someone from Bloomingdale's, too."

But Sui says that when her boss saw a New York Times ad with her fashions, "He said, 'You can't do your own clothes if you're working for me, you have to stop.' And I said, 'Well, I can't stop, I have to ship my orders.' And I got fired!" she laughed.

For many years she operated out of her own apartment, but now she has her own workshop for the label she officially launched in 1981.

Known for her meticulous research, Sui says her latest collection is inspired by fashion from the end of the 19th century.

Like most designers, she always worries about whether her clothes will sell, but now there's a new concern: The worst economy she's ever faced.

"I mean, it was really bad after 9/11, but it passed quickly," Sui said. "I think when I first started in the '80s, I think it was a similar economy, but we hadn't gone through all those boom years. So there was nothing for me to compare it to. Yeah, it's a scary time."

She has definitely tried to economize.

"One thing we've been really mindful of is the cost of materials, because it's been skyrocketing. So we haven't been going crazy with the base fabrics that we're choosing."

But there is one place where she hasn't cut back. While some prominent designers cancelled their fashion shows this year, she decided to go forward.

"Again, that's always something [in] the back of your head, and it's hard, when all you hear are these stories every day and watch the news every day," she said. "It's what I gotta do, I have to push forward."

Indeed, at her show last month during New York's Fashion Week, the mood was distinctly upbeat with an undeniable personality: