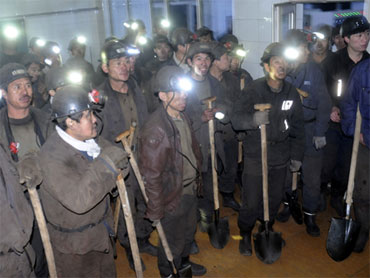 The massive blast Saturday in Hegang city in frigid Heilongjiang province erupted at night when some 500 miners were working below ground. Most escaped, but 104 were confirmed dead and an additional four were missing and feared dead, the official Xinhua news agency reported Monday.

The explosion at the Xinxing coal mine, which belongs to the state-owned Heilongjiang Longmei Mining Holding Group, was the deadliest in China's mining industry in two years, and has highlighted how heavy demand for power-generating coal comes at a high human cost.

At the gates of the mining company's offices, family members and friends confronted mining officials with questions until some of them were escorted into an office by police, security guards and other officials.

"Why don't you tell us anything?" one shouted. "Not even a phone call!"

Inside the room, Liu Shujiu, whose 38-year-old husband Zhang Shulai was among the victims, broke down in tears as she sat in a chair

"Why haven't they told us anything?" she wailed. "We had to hear from others at the mine."

A mine official, who - like many Chinese officials - refused to give his name for fear of government reprisals, held up a list of miners' names and tried to calm the crowd: "There are certainly dead. You don't take it well, we know. But there's a process. I feel as bad as you," he said, pausing before admitting that the delay in informing family members was a mistake.

Liu, who said mining officials had brought her rice but little information over the weekend, said officials have given families no information about the details and circumstances of the blast.

"We thought the state mines were safe. Why did he die?" she said. The couple have a 9-year-old daughter, whom she had not yet told. "How do I tell her that her father is not coming home?"

Another woman, whose husband Hou Yubin was among the dead, remained seated and silent. She was later laid across some chairs with an IV in her arm as a nurse hovered nearby.

An investigation is under way by China's State Administration of Work Safety, as top leaders were dispatched to Heilongjiang. Vice Premier Zhang Dejiang arrived over the weekend to oversee the rescue effort, and urged safety measures to be stepped up at coal mines nationwide. Search and rescue efforts appeared to be over at the blast site by Monday morning.

The Xinxing mine's director, deputy director and chief engineer were fired, said an employee, who refused to give his name because he was not authorized to speak to the media.

The blast at the nearly 100-year-old mine in Heilongjiang (pronounced HAY-long-jeeahng) province, near the Russian border, shows the difficulties the central government faces in trying to improve safety. In recent years, it has shuttered or absorbed hundreds of smaller, private mines into state-owned operations, which are considered generally safer.

China has the deadliest mining industry in the world, but coal is vital for the country's economy, which is targeted to grow by 8 percent this year.

Government officials have been trying to increase safety standards. In the first six months of the year, 1,175 people died, marking a drop of 18.4 percent from the same period the previous year.

"Development is important, but the growth of GDP shouldn't be achieved at the price of miners' blood," said provincial governor Li Zhanshu over the weekend, urging officials to better manage coal mines.

Of the 528 people reported working in the mine at the time of the explosion, 420 escaped, Xinhua reported. On Monday, Dr. Han Songtai at Xingshan Hospital said 18 miners were being treated at his facility, five of them in serious condition. The injured were also taken to other hospitals in the ar
By Associated Press Writer Cara Anna