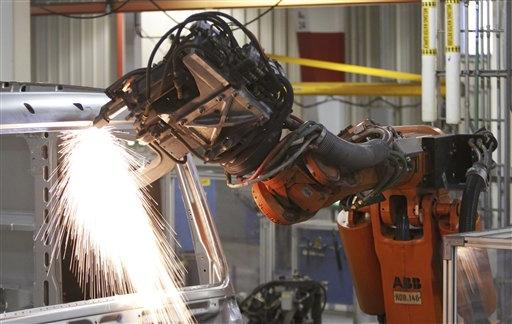 Output by America's factories, mines and utilities dipped 0.1 percent last month, the Federal Reserve said Wednesday. The decline was caused mostly by a decrease in output by utilities after a weather-related peak in December.

Industrial production increased in every month but one last year. It has risen by more than 11 percent since hitting its recession low in June 2009. But it remains about 6 percent below its pre-recession peak in 2007.

"Despite a small decline in overall industrial production, solid growth in the manufacturing sector continues to lead the recovery," said Thomas Duesterberg, president and CEO of the Manufacturers Alliance/MAPI, an industry group.

Duesterberg said the group expects demand for exports, business equipment and long-lasting consumer goods such as autos to boost factory output by at least 5.5 percent this year. That's the same amount it increased in the past 12 months.

"If relative weakness in the aerospace sector and in construction materials and supplies for the U. S. market were to turn around, we could see even stronger growth in 2011 and 2012," Duesterberg said.

The increase in factory output was expected, in part because factories added 49,000 jobs last month, the most since August 1998. And factory employees worked longer hours, another positive sign for output.

Factory growth has provided crucial momentum for the economic recovery, with makers of machinery, computers, electronics and metals all showing double-digit increases over the past year.

For the first half of last year, demand was fueled by businesses replacing equipment and machines that wore out during the recession. Rising overseas sales of U.S. exports have helped keep factory growth on a positive trend in recent months.

Severe winter storms in January might have limited some factories' ability to increase production.

Overall production increased in December by the largest amount in seven months. The Fed revised December's production gains upward to 1.2 percent from 0.8 percent.

U.S. industry operated at 76.1 percent of its total capacity in January, a decline of 0.1 percent from December, the Fed said. The extra capacity is seen as a counterweight against inflation. Rising demand will cause more factories to come online. The competition will keep those already operating from boosting prices.

Sales of cars and light trucks in January rose 17 percent from a year earlier, as Americans signaled that they were ready to replace their clunkers. Nearly all big car companies reported double-digit gains for the month, a sign that the slow recovery in U.S. auto sales that began in 2010 remains on track.

Sales of auto parts also have boomed, as some consumers choose to drive their cars longer.

Brisk demand led auto makers to produce 3 percent more cars and parts in January than they did in December, their strongest showing in six months, the Fed said.