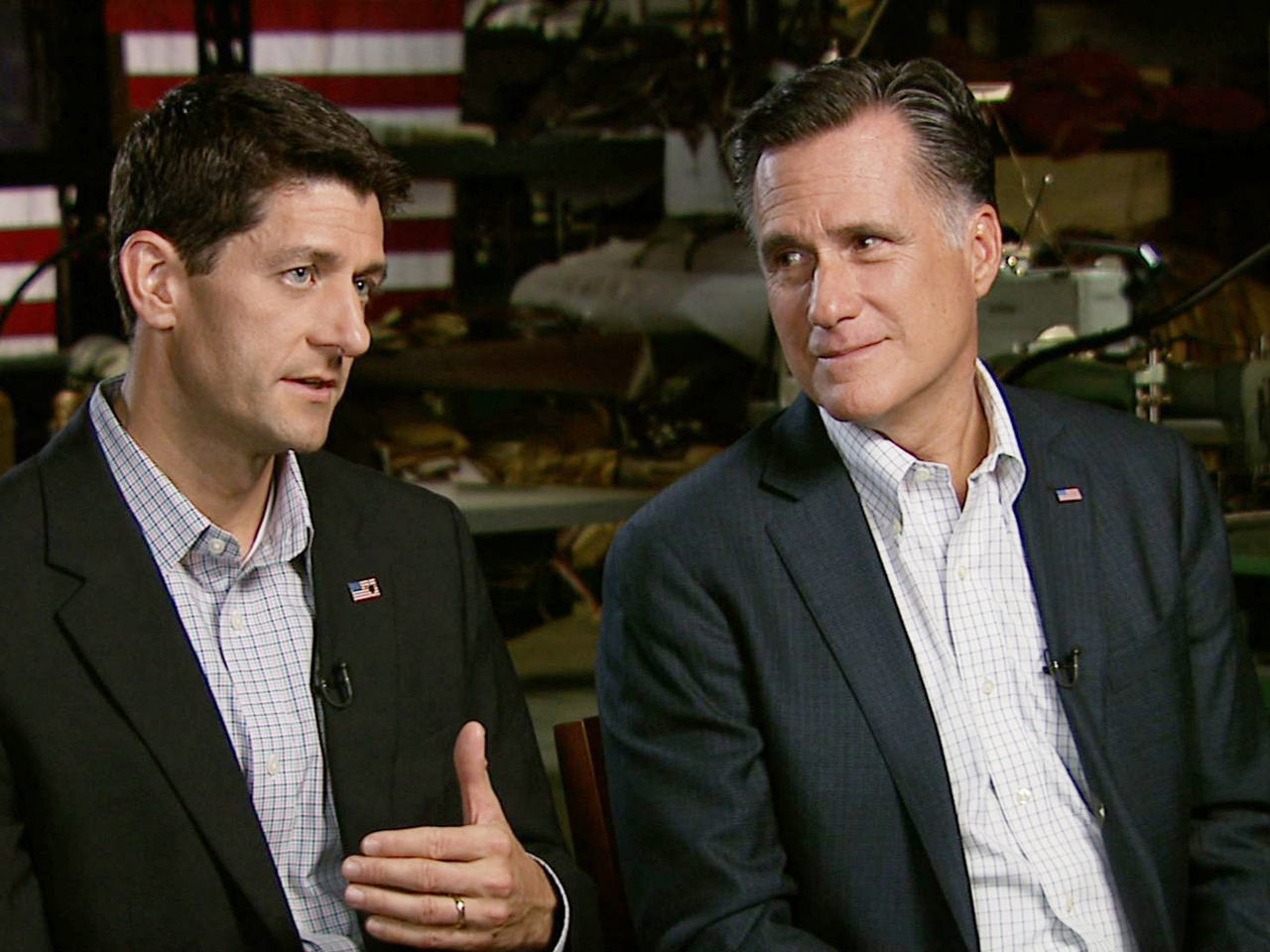 (CBS News) A day after Mitt Romney's Saturday announcement that he'd tapped Paul Ryan to be his running mate, the duo spoke with CBS News' Bob Schieffer on everything from tax reform to Medicare to bipartisanship. Below, CBS News fact-checks the pair's claims, which aired Sunday night on "60 Minutes."

MITT ROMNEY: There's only one president that I know of in history that robbed Medicare, $716 billion to pay for a new risky program of his own that we call Obamacare. Think of that. What Paul Ryan and I have talked about is saving Medicare, is providing people greater choice in Medicare, making sure it's there for current seniors. No changes, by the way, for current seniors, or those nearing retirement. But looking for young people down the road and saying, "We're going to give you a bigger choice." In America, the nature of this country has been giving people more freedom, more choices. That's how we make Medicare work down the road.

Did President Obama rob Medicare to pay for the Affordable Care Act? The Romney campaign points to a CBO report showing that if the health care law was repealed, spending for Medicare would increase by an estimated $716 billion from 2013-2022. The president's health care reform law is indeed paid for in part by reducing Medicare's expected rate of growth between now and 2022. According to data from the Kaiser Foundation, however, the reductions come primarily from cuts to Medicare Advantage plans, as well as in hospital reimbursements and in payments to other providers. It does not limit access to benefits for Medicare recipients, but Republicans say it creates disincentives for hospitals and doctors to accept new Medicare patients. According to proponents of the Affordable Care Act, on the other hand, the reductions streamline the system, reduce waste and fraud, reinforce the Medicare trust fund and extend its lifeline -- all without stripping recipients of coverage. It's also worth noting that Ryan's 2012 budget would have included many of the same Medicare reductions as are outlined in the president's health care plan.

Ryan and Romney also say they've talked about giving seniors "a bigger choice" in Medicare options going forward. Romney has yet to unveil a specific proposal for Medicare reform, but Ryan's plan would indeed give people the choice of sticking with the current, government-run system or enrolling in private plans. Under the current Medicare system, however, recipients also have that choice -- with the Medicare Advantage program, which allows beneficiaries to choose between the government plan and Medicare-approved private companies.

The Ryan plan, however, limits federal Medicare contributions to a predetermined amount for individual patients, beyond which seniors would have to pay out of pocket. Republicans argue that they would be compelled to spend less money on health care and that the private sector would respond by providing more efficient, effective care and additional choices. Some experts, however, contend that in order to provide those low-cost options, private plans would have to limit the number of physicians they contract out -- which means seniors would actually have less choice with regard to their choice of doctors.

Moreover, critics of the Ryan plan argue it would allow private insurers to cherry-pick healthy seniors, meaning that the sicker seniors would be left with traditional Medicare, which would result in increased costs overall. If that happens, hospitals and doctors will be less likely to participate in Medicare because the reimbursement rates will be less competitive, and sick seniors will ultimately end up paying more out of pocket -- especially given that under the voucher system, increases in spending caps would not necessarily keep up with medical inflation.

"No changes" for current seniors?

In his interview with CBS News' Bob Schieffer Sunday, Romney reassured voters that his plan for Medicare would entail "no changes, by the way, for current seniors, or those nearing retirement." This is mostly true under Ryan's plan, which would not go into effect for current Medicare recipients or those 55 and up. But repealing the Affordable Care Act - which both Romney and Ryan have pledged to do - would re-open the so-called donut hole, a coverage gap in the Medicare drug benefit, which under the president's health-care plan is gradually closing.

Mitt Romney: Well, fairness dictates that the highest income people should pay the greatest share of taxes, and they do. And the commitment that I've made is we will not have the top income earners in this country pair-- pay a smaller share of the tax burden. The highest income people will continue to pay the largest share of the tax burden and middle-income taxpayers, under my plan, get a break. Their taxes come down. So, we're not going to reduce taxes for high-income people, and we are going to reduce taxes for middle-income people...

Asked if that was still true when capital gains were factored in, Romney continued:

"If you look at the top one percent or five percent or quartile, whatever, they pay the largest share of taxes. And that's not something which I would propose making smaller.

Mitt Romney has been criticized in the past for failing to provide specific policy plans, but he has outlined a loose policy proposal for addressing the nation's tax system. His plan, which he says is revenue-neutral, would cut tax rates by 20 percent across the board, repeal the estate tax and get rid of taxes in investment income for those making up $200,000. He says subsequent decreases in tax revenue would be offset by closing tax loopholes and deductions, but has yet to point to specific loopholes and deductions he would close.

According to Roberton Williams of the nonpartisan Tax Policy Center - a joint project of the Brookings Institution and the Urban Institute - it's hard to see how the numbers from Romney's stated plan would match up with his claim that middle-class taxes would be reduced, because it would be almost impossible to find enough loopholes affecting only high-earners to make up for the revenue lost in cuts elsewhere.

A study put out by the Tax Policy Center earlier this month concludes that inevitably, Romney's plan would result in "large tax cuts to high-income households, and increase the tax burdens on middle- and/or lower-income taxpayers." The Romney campaign has disputed that assessment, which it argues is "biased" and "ignores critical parts of Governor Romney's tax reform program," but has not released any additional specifics providing insight into how it would actually implement the plan.

On Paul Ryan finding "common ground" with the other side

According to Romney, his newly-minted running mate has a "unique capacity" for finding a "common purpose" with people of different parties:

"Of course, you have a legislative affairs director that takes that kind of lead as well, but you can't imagine having someone like Paul Ryan, who's been able to work with Democrat senators, Democrat members of the House as well as Republicans, been able to make things happen there. I can't imagine not using him. And to have his skill in finding those people that can come together and find common ground, despite differing views on issues. This is one of the key reasons I've selected him. Is that he has that unusual, almost a unique capacity to find people of different parties who are of a common purpose that can come together to do something that's right for the county."

With 14 years of congressional service under his belt, Paul Ryan boasts some bipartisan achievements. This year, he co-sponsored a line-item veto bill with Democratic Rep. Chris Van Hollen, and he worked with Democratic Oregon Senator Ron Wyden on his controversial 2011 budget plan. (According to the Huffington Post, Wyden is now distancing himself from the notion that he "co-led" the legislation, arguing that he merely wrote a policy paper on Medicare options.) He has also voted for some controversial bipartisan bills like the TARP and the auto bailout.

But Ryan is not known in Washington as a regular bipartisan consensus builder: He was one of three people on the Simpson-Bowles commission to vote against moving forward with the recommended plan to reduce the deficit, and was reportedly the person to throw a wrench into the "Gang of Six" deficit deal last summer. His controversial budget plan, too, is staunchly conservative, and the 2011 version passed through the House with no support from Democrats.

Ryan has certainly worked with Democrats in the past, but he's more known for trying to build consensus within his own party.