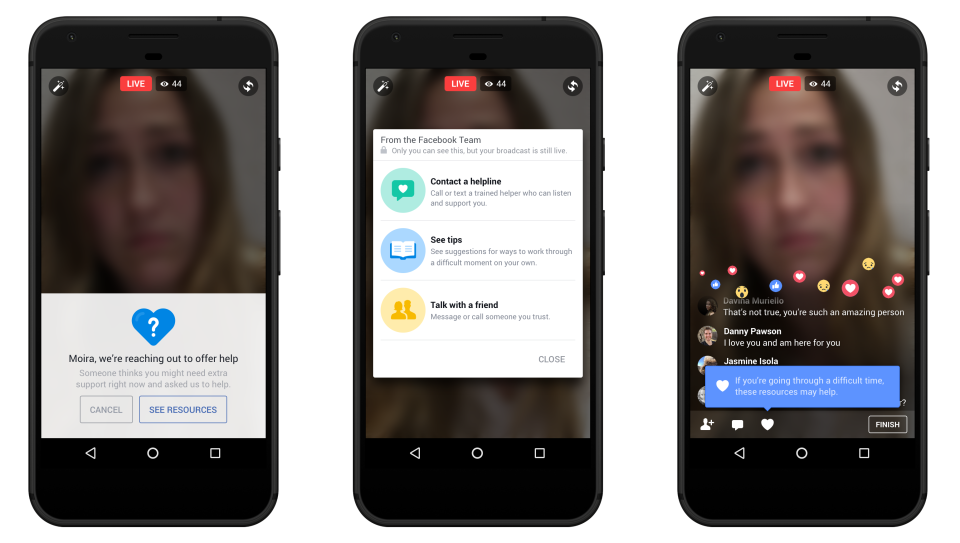 Facebook said Wednesday that it’s in a “unique position,” through personal connections people have on Facebook, to help connect those in distress with people who can support them.

To this end, people watching a Facebook Live broadcast will be able to report the video for an escalated response from Facebook. Facebook can reach out to emergency workers if the person is in imminent danger. Separately, the person filming will also be shown a set of resources pop up on their phone screen, so they can contact a friend or a help line.

The company is also streamlining the process to report posts about suicide or self-injury. And someone feeling depressed will have easier ways to contact crisis workers through Messenger.

While it’s unclear how much of an impact these features will have, rolling them out is the “responsible thing” for a company like Facebook to do, licensed clinical social worker David W. Bond told CBS News. Bond is the vice president of programs at the Trevor Project, an organization that works to fight suicide among LGBT youth. The rate of suicide attempts is four times greater for lesbian, gay and bisexual young people, and two times greater for those questioning their sexual orientation, compared to straight youth, according to a study from the U.S. Centers for Disease Control and Prevention.

“When you’re on Facebook Live and see someone who has a need for help, people still have a complicated time figuring out what they can do to be helpful,” Bond said. “This tool allows people to rescue others from a suicide attempt in a way that simply did not exist before.”

The Trevor Project has advised Facebook in the past about how to better protect LGBTQ youth online, but was not involved in developing the latest tools.

Social networks like Facebook still have room to grow in suicide prevention, Bond said. He noted that the dynamics are far from simple as companies simultaneously navigate other obligations, such as the duty to protect free speech.

As a next step in bolstering suicide prevention, Bond suggested that social networks could inform users of how certain actions — for instance, re-posting or re-tweeting a deceased user’s suicide note — could actually contribute to suicide contagion, a phenomenon in which exposure to suicide or suicidal behaviors can result in an increase in similar behavior among others.

“That could help users,” he said, “[since] that post may contribute to someone else’s consideration of suicide.”

Last month, a 14-year-old Florida girl livestreamed her suicide on Facebook. Nakia Venant, who had been in and out of foster care for more than seven years, killed herself several hours after she wrote on Facebook: “I Don’t Wanna Live No More,” adding three sad-faced emojis. She was at least the third person to live-stream a suicide in the previous month.

Facebook has had some suicide prevention tools for more than a decade.