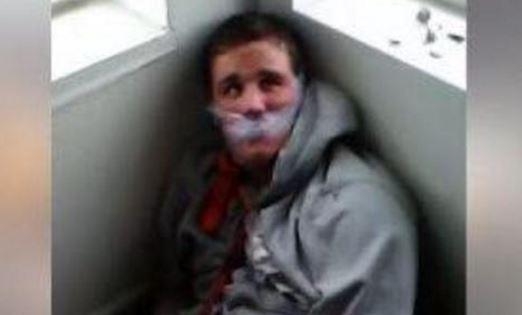 CHICAGO — Chicago, which just had one of its most violent years ever, was the scene of another horrifying attack this week.

Four suspects are in custody after a disturbing live-streamed video of a duct-taped man allegedly being tortured on Chicago’s West Side, CBS Chicago reported.

In the video, the victim’s clothes were cut, he was peppered with cigarette ashes, and then his hair cut with a knife until his scalp bled.

Several people can be seen laughing and eating as the attack is going on.

The incident took place Tuesday in an apartment on Chicago’s West Side, a police spokesperson said.

The victim, who has special needs, was a high-risk missing person from northwest suburban Crystal Lake.

Police said he traveled to Carol Stream to meet a friend. They ended up in a stolen car, driven to the West Side, where the attack took place.

Chicago police said in a statement that while on patrol, they observed the disoriented male walking outside. He was then transported to an area hospital for treatment.

“At 5:26 p.m. officers then responded to a battery at a residence on the 3300 block of W. Lexington where they discovered signs of a struggle and damage to the property and where able to link this evidence to the disoriented male,” the statement said. “Officers later became aware of a social media video depicting a battery of an adult male which is believed to be the same individual.”