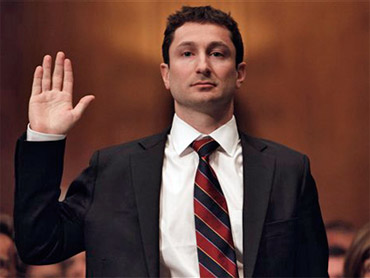 Fabrice Tourre, the lone Goldman Sachs employee named in the SEC fraud suit against the investment bank, stepped into the spotlight Tuesday, telling lawmakers that "I did not mislead" investors involved in the case.

"I deny - categorically - the SEC's allegation," Tourre said. "And I will defend myself in court against this false claim."

For Tourre, 31, Tuesday's appearance before the Senate Permanent Subcommittee on Investigations represented his first public appearance to personally answer the charges against him. Since the SEC unveiled its civil suit against Goldman Sachs, Tourre has been heavily scrutinized, thanks to emails released by the SEC and later, Goldman.

In a brash January 2007 e-mail released by the SEC, Tourre called himself "The fabulous Fab ... standing in the middle of all these complex ... exotic trades he created without necessarily understanding all of the implications of those monstrosities!!!"

Tourre's "fabulous" moniker provided fodder for protesters before the hearing, who chanted in a chorus that "Fabulous Fab is not so fab when he takes from the poor" adding that "We want to see these guys behind bars."

Tourre, who appeared calm during the appearance, testified that he does not recall telling investors that a Goldman hedge fund client was betting against an investment that soured. The hedge fund, Paulson & Co., profited handsomely from the deal.

Tourre said the other investors in the deal, ACA Management LLC and German bank IKB, were "sophisticated" and were ultimately responsible for the outcome of their investments.

The investment in question was a collateralized debt obligation backed by subprime mortgage securities. ACA was chosen to select the mortgages that made up the security, but had input from Paulson.

Tourre said that while Paulson made suggestions as to the mortgage securities, ACA had "sole authority to decide what securities would be referenced in the transactions"

"So, while Paulson, Goldman Sachs and IKB all had input into the reference portfolio … ACA ultimately analyzed and approved every security in the deal. Thus, when Goldman Sachs represented to investors that ACA selected the referenced securities, that statement was absolutely correct," Tourre said.

In e-mails released by Goldman Sachs over the weekend, Tourre appeared slightly more conflicted about his role in e-mails to his girlfriend, Marine Serres, though his tone was often joking.

"Anyway, not feeling too guilty about this, the real purpose of my job is to make capital markets more efficient and ultimately provide the U.S. consumer with more efficient ways to leverage and finance himself, so there is a humble, noble and ethical reason for my job ;) amazing how good I am in convincing myself !!!"

In one note, he mused that the complex investments he helped create were becoming like "Frankenstein turning against his own inventor."

His tone could be dismissive at times, at one point joking that he sold risky bonds to "widows and orphans."

In June 2007, Tourre wrote in an e-mail to his girlfriend: "Just made it to the country of your favorite clients!!! I'm managed (sic) to sell a few abacus bonds to widow and orphans that I ran into at the airport, apparently these Belgians adore synthetic abs cdo2,"

Referencing colleague Daniel Sparks, who managed the mortgages department at Goldman, Tourre wrote in a March 7, 2007, that "according to Sparks, that business is totally dead, and the poor little subprime borrowers will not last so long!!!"

During the testimony, Tourre said he regrets sending those e-mails.