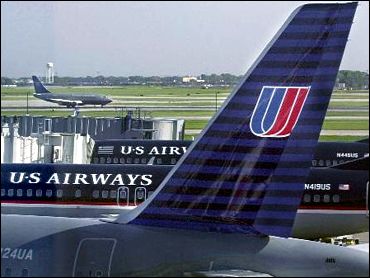 The Federal Aviation Administration on Wednesday proposed levying multimillion-dollar fines against United Airlines and US Airways for safety violations, including flying a plane after mechanics stuffed shop towels into an engine.

The agency said it has proposed a $5.4 million fine against US Airways of Tempe, Arizona, for operating eight planes on a total of 1,647 flights from October 2008 to January 2009 in violation of safety directives or the company's own maintenance rules.

The agency also said it is proposing a $3.8 million fine against United of Chicago for operating one of its Boeing 737 aircraft on more than 200 flights with shop towels covering openings near where oil collects in the bottom of the engine instead of using protective caps required by the carrier's maintenance procedures.

Under FAA rules, the airlines have 30 days to present mitigating evidence before the agency can impose the fines. It's not unusual for fines to be reduced as the result of negotiations.

The hefty fines reflect the large number of flights that were allowed to carry passengers in violation of safety requirements, FAA spokeswoman Alison Duquette said. The agency doesn't know how many passengers were on the flights, she said.

FAA said US Airways failed to perform inspections required under its maintenance program related to engine work on a Boeing 757 that was flown 505 times. The airline also operated an Airbus A320 on 855 flights even though the aircraft did not meet the airline's maintenance program requirements for an engine repair, the agency said.

Among other violations, the airline also operated an Embraer 190, a regional jet, on 19 flights without complying with a safety directive that required inspections to prevent a cargo door from opening during flight, FAA said.

US Airways Chief Operating Officer Robert Isom said Wednesday in a message to employees that the airline "worked cooperatively with the FAA to investigate and correct any discrepancies to the FAA's satisfaction."

"The changes we have made have improved upon an already solid maintenance program," the airline said in a statement.

The United fine involves a Boeing 737 that returned to Denver in April 2008 after shutting down an engine due to low oil pressure indications, FAA said. During teardown of the engine a week later, United mechanics found that two shop towels, instead of required protective caps, had been used to cover openings in the oil sump area when maintenance was done in December 2007, FAA said.

"As a result of United's failure to follow its maintenance procedures ... it flew the aircraft on more than 200 revenue flights when it was not in an airworthy condition," FAA said in a statement. United's maintenance procedures specifically require use of protective caps or covers on all components that could be adversely affected by entry of foreign materials, the agency said.

United spokesman Megan McCarthy said the airline "immediately reported the incident and our findings to the FAA. United Airlines has the highest standards for safety and we are fully confident we took appropriate and necessary measures to ensure those standards are met."

The largest fine proposed by FAA was $10.2 million in March 2008 against Southwest Airlines for operating nearly 60,000 flights in 2006 and 2007 of planes that had missed required examinations for structural cracks and for flying them 1,451 times after being notified of the missed inspections. That fine was settled for $7.5 million in March 2009. The highest fine levied by FAA was nearly $9 million against Eastern Airlines, but it was never collected because the airline went bankrupt.

Last year, FAA ordered American Airlines to pay a $7.1 million fine for flying two jets 58 times without making repairs after an FAA inspector and American's own mechanics found problems with their autopilot systems, among other violations.