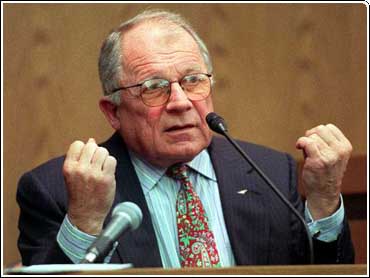 F. Lee Bailey testified Tuesday that the late Dr. Sam Sheppard told him privately that he thought he confronted two people in his house the night the doctor's wife was killed.

Sheppard always publicly insisted a bushy-haired intruder killed his wife in July 1954. Bailey, who fought to clear Sheppard in the 1960s, was forced under cross-examination Tuesday to recount the maddening uncertainties that have clung for decades to the case that partly inspired The Fugitive TV series and film.

Bailey testified for a second day in the trial of a lawsuit by Sheppard's son. Sam Reese Sheppard claims his father was wrongfully imprisoned in Marilyn Sheppard's death. As the lead-off witness, Bailey's purpose was to show that Sheppard was originally denied a fair trial because of a huge media outcry against him.

But under cross-examination Monday and Tuesday morning, Bailey also said he disagrees with the doctor's son about who the real killer is. The younger Sheppard thinks a window washer for the family, the late Richard Eberling, was the murderer. Eberling was later convicted of stealing Mrs. Sheppard's rings in a 1959 burglary and was convicted in 1989 of killing an elderly widow.

Bailey adopted the theory that a couple in the Sheppards' Bay Village neighborhood, Spencer and Esther Houk, were responsible for Mrs. Sheppard's beating death.

Bailey suggested in 1966 that Mrs. Houk might have delivered the fatal blows to Mrs. Sheppard after catching Houk having sex with her. Bailey said he knew of Eberling but did not consider him a likely suspect.

Bailey acknowledged Tuesday that he had Eberling testify in the 1966 retrial that Eberling cut himself and bled in the Sheppard house. Under questioning from assistant prosecutor Steve Dever, Bailey also conceded the doctor did not recognize Eberling as the killer when he came to testify. "That did not happen," Bailey said.

Bailey's testimony came after Sheppard attorney Terry Gilbert told jurors that DNA evidence unavailable at the original trials will show that someone other than the Sheppards bled in the bedroom where she was killed.

The doctor always told police that the bushy haired intruder killed his wife and then knocked him unconscious in a scuffle. But Bailey testified that Sheppard told him he had the impression he confronted two people and agreed with Bailey's theory that the Houks were the killers.

According to Bailey, Sheppard "talked about the possibility" that his wife had an affair with Houk.

Prosecutors, who are defending the state against the wrongful imprisonment claim, told jurors the Sheppards' marriage was strained badly by the doctor's repeated and widely known extramarital affairs. The weekend of her murder, Mrs. Sheppard was angry with her husband because a houseguest had been speaking openly about one of the doctor's lovers, they said.

Dr. Sheppard spent 10 years in prison for his wife's saying before the U.S. Supreme Court, after hearing arguments from Bailey, overturned the verdict because of the effects of pretrial publicity on jurors and witnesses. Sheppard was acquitted at a retrial in 1966 and died four years later.

When he took Sheppard's case in 1961, Bailey told Cuyahoga County jurors Monday, he was angry about the injustices done to the doctor and wanted to "take a chip out of the seal of the great state of Ohio."