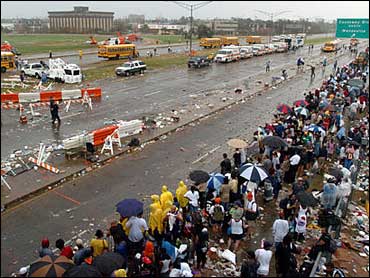 New fears struck Friday morning in New Orleans, as explosions rocked the riverfront a few miles south of the French Quarter. The cause of the blasts at about 4:35 a.m. and the extent of any possible damage is not yet known.

An initial explosion sent flames of red and orange shooting into the pre-dawn sky. A series of smaller blasts followed and then acrid, black smoke that could be seen even in the dark. The vibrations were felt all the way downtown.

The explosions appeared to originate close to the east bank of the Mississippi River, near a residential area and rail tracks. At least two police boats are at the scene.

President Bush is to visit the hurricane zone today - first Mississippi and Alabama, and then New Orleans, where the situation continues to grow more desperate, with police reporting some refugees being raped and beaten.

First lady Laura Bush will travel separately to the area devastated by Hurricane Katrina, and will be meeting face to face with refugees in Lafayette, Louisiana.

Some who fled New Orleans' floodwaters for what they thought would be the safety of the Superdome or the city's Convention Center have found death instead.

At least two bodies are in plain sight at the Convention Center.

Flood victims desperate not to share that fate have been trying to get onto scare buses to take them out of town - at the Superdome and the Convention Center, and on a highway several miles away: standing, watching, and hoping against hope.

One place they won't be going is the Astrodome: it filled up overnight, and newly arriving refugees will be sent to other shelters in Texas.

"This is a desperate SOS," said New Orleans Mayor C. Ray Nagin, as he described deteriorating conditions in the city that only a few days ago fondly called itself the "Big Easy."

Fights and fires have broken out, looting continues to be a problem, corpses lie out in the open, and rescue helicopters and law enforcement officers have been shot at as the more than 80 percent flooded city spirals into increased anarchy.

The governor declared war on looters who have made the city a menacing landscape of disorder and fear.

"They have M-16s and they're locked and loaded," Gov. Kathleen Blanco said of 300 National Guard troops who landed in New Orleans fresh from duty in Iraq. "These troops know how to shoot and kill, and they are more than willing to do so, and I expect they will."

Thursday, President Bush harkened back to the U.S. response to the tsunami when he asked his father, former President George H.W. Bush, and former President Clinton to lead a private fund-raising campaign for victims, as they did in South Asia last winter.

"This is an agonizing time for the people of the Gulf Coast," Mr. Bush said Thursday as he stood with the two former presidents in the White House and urged patience, saying relief is on the way.

Anger mounted across the ruined city, with thousands of Hurricane Katrina victims increasingly hungry, desperate and tired of waiting for buses to take them out.

"We are out here like pure animals. We don't have help," the Rev. Issac Clark, 68, said outside the New Orleans Convention Center, where corpses lay in the open and the and other evacuees complained that they were dropped off and given nothing — no food, no water, no medicine.

CBS News Correspondent Lee Cowan reports that in the heart of New Orleans' medical district, some of the most decorated hospitals in the country have become islands of desperation.

"We're down to one day's rations… That's all we have," Dr. Steven Morse of LSU told Cowan.

About 15,000 to 20,000 people who had taken shelter at the convention center to await buses grew increasingly hostile. Police Chief Eddie Compass said he sent in 88 officers to quell the situation at the building, but they were quickly beaten back by an angry mob.

Meanwhile, officials declared a public health emergency along the Mississippi coast due to unsafe drinking water, and surveyors say the town of Waveland, 35 miles from New Orleans, was completely obliterated by Hurricane Katrina.

National Guardsmen poured in to help restore order and put a stop to the looting, carjackings and gunfire that have gripped New Orleans in the days since Katrina plunged much of the city under water.

Although more Guardsmen are on the way, CBS News Correspondent John Roberts reports that there's still a surprising lack of force on the ground and the mayor fears the city will be gripped by anarchy.

CBS News National Security Correspondent David Martin reports that with 40,000 National Guard troops already called up for duty, the Army is making preparations to send in as many as 10,000 combat troops from the active duty force.

But across the flooded-out city, the rescuers themselves came under attack from storm victims.

"Hospitals are trying to evacuate," said Coast Guard Lt. Cmdr. Cheri Ben-Iesan, spokesman at the city emergency operations center. "At every one of them, there are reports that as the helicopters come in people are shooting at them. There are people just taking potshots at police and at helicopters, telling them, `You better come get my family."'

Some Federal Emergency Management rescue operations were suspended in areas where gunfire has broken out, Homeland Security spokesman Russ Knocke said in Washington. "In areas where our employees have been determined to potentially be in danger, we have pulled back," he said.

A National Guard military policeman was shot in the leg as he and a man scuffled for the MP's rifle, police Capt. Ernie Demmo said. The man was arrested.

Outside the Convention Center, the sidewalks were packed with people without food, water or medical care, and with no sign of law enforcement. Thousands of storm refugees had been assembling outside for days, waiting for buses that did not come.

At least seven bodies were scattered outside, and hungry people broke through the steel doors to a food service entrance and began pushing out pallets of water and juice and whatever else they could find.

An old man in a chaise lounge lay dead in a grassy median as hungry babies wailed around him. Around the corner, an elderly woman lay dead in her wheelchair, covered with a blanket, and another body lay beside her wrapped in a sheet.

"I don't treat my dog like that," 47-year-old Daniel Edwards said as he pointed at the woman in the wheelchair. "I buried my dog." He added: "You can do everything for other countries but you can't do nothing for your own people. You can go overseas with the military but you can't get them down here."

The street outside the center, above the floodwaters, smelled of urine and feces, and was choked with dirty diapers, old bottles and garbage.

"They've been teasing us with buses for four days," Edwards said.

People chanted, "Help, help!" as reporters and photographers walked through. The crowd got angry when journalists tried to photograph one of the bodies, and covered it over with a blanket. A woman, screaming, went on the front steps of the convention center and led the crowd in reciting the 23rd Psalm.

The Superdome, where some 25,000 people were being evacuated by bus to the Houston Astrodome, descended into chaos as well.

Huge crowds, hoping to finally escape the stifling confines of the stadium, jammed the main concourse outside the dome, spilling out over the ramp to the Hyatt hotel next door — a seething sea of tense, unhappy, people packed shoulder-to-shoulder up to the barricades where heavily armed National Guardsmen stood.

At the front of the line, heavily armed policemen and guardsmen stood watch and handed out water as tense and exhausted crowds struggled onto buses. At the back end of the line, people jammed against police barricades in the rain. Luggage, bags of clothes, pillows, blankets were strewn in the puddles.

Many people had dogs and they cannot take them on the bus. A police officer took one from a little boy, who cried until he vomited. The policeman told a reporter he didn't know what would happen to the dog.

Fights broke out. A fire erupted in a trash chute inside the dome, but a National Guard commander said it did not affect the evacuation. After a traffic jam kept buses from arriving at the Superdome for nearly four hours, a near-riot broke out in the scramble to get on the buses that finally did show up.

Col. Henry Whitehorn, head of state police, said authorities are working on establishing a temporary jail to hold people accused of looting and other crimes. "These individuals will not take control of the city of New Orleans," he said.

The first of hundreds of busloads of people evacuated from the Superdome arrived early Thursday at their new temporary home — another sports arena, the Houston Astrodome, 350 miles away.

But the ambulance service in charge of taking the sick and injured from the Superdome suspended flights after a shot was reported fired at a military helicopter. Richard Zuschlag, chief of Acadian Ambulance, said it was too dangerous for his pilots.

The military, which was overseeing the removal of the able-bodied by buses, continued the ground evacuation without interruption, said National Guard Lt. Col. Pete Schneider. The government had no immediate confirmation of whether a military helicopter was fired on.

Terry Ebbert, head of the city's emergency operations, warned that the slow evacuation at the Superdome had become an "incredibly explosive situation," and he bitterly complained that FEMA was not offering enough help.

"This is a national emergency. This is a national disgrace," he said. "FEMA has been here three days, yet there is no command and control. We can send massive amounts of aid to tsunami victims, but we can't bail out the city of New Orleans."

In Texas, the governor's office said Texas has agreed to take in an additional 25,000 refugees from Katrina and plans to house them in San Antonio, though exactly where has not been determined.