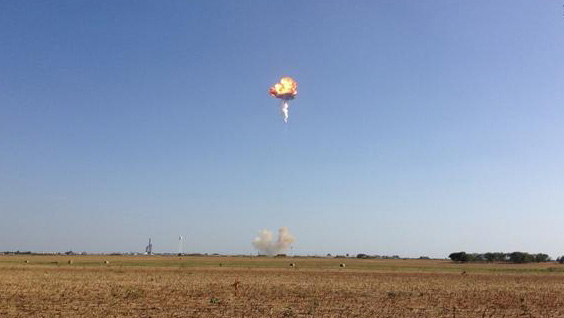 The uncrewed rocket stage, a successor to SpaceX's original "Grasshopper" vertical-takeoff-and-landing test vehicle, was destroyed when its self-destruct system was triggered in the wake of an unexplained malfunction.

"Earlier today, in McGregor, Texas, SpaceX conducted a test flight of a three-engine version of the F9R test vehicle (successor to Grasshopper)," the company said in a statement. "During the flight, an anomaly was detected in the vehicle and the flight termination system automatically terminated the mission.

"Throughout the test and subsequent flight termination, the vehicle remained in the designated flight area. There were no injuries or near injuries. An FAA representative was present at all times."

SpaceX founder and chief designer Elon Musk said in a Twitter posting the "three engine F9R Dev1 vehicle auto-terminated during test flight. No injuries or near injuries. Rockets are tricky..."

SpaceX is scheduled to launch the AsiaSat 6 communications satellite next week from the Cape Canaveral Air Force Station in Florida, followed by launch of a SpaceX Dragon cargo ship to the International Space Station on Sept. 19.

Company engineers carried out a launch pad first-stage engine "hot fire" test of the Falcon 9 slated for the AsiaSat flight Friday, but it's not yet clear what impact, if any, the Texas test failure might have on the upcoming launches.

Musk believes "rapid reusability" is critical for lowering the cost of space flight and SpaceX is carrying out an unprecedented test program to perfect the technology, both hardware and software, required to guide rocket stages back to powered landings for recovery, refurbishment and reuse.

The test failure Friday was the first catastrophic mishap in the test program's history.

"With research and development projects, detecting vehicle anomalies during the testing is the purpose of the program," SpaceX said in its statement. "Today's test was particularly complex, pushing the limits of the vehicle further than any previous test.

"As is our practice, the company will be reviewing the flight record details to learn more about the performance of the vehicle prior to our next test."

One source said the self-destruct system was triggered because of trouble with one of the test rocket's three engines, but that could not be immediately confirmed.

"SpaceX will provide another update when the flight data has been fully analyzed," the company said.