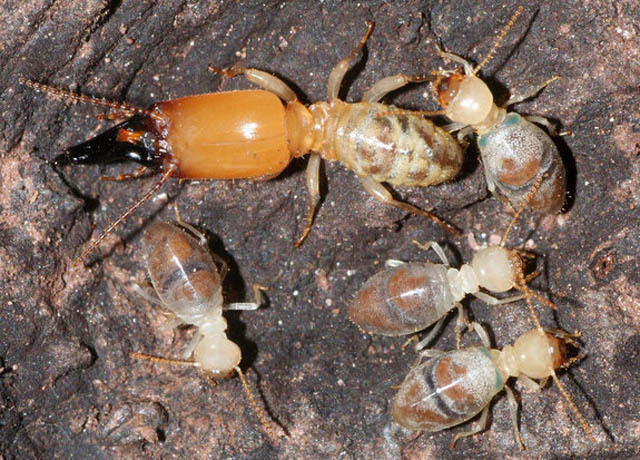 When grabbed by another termite, a predator or a person with tweezers, these backpack-sporting termites, which the researchers call blue workers, rupture and spew a toxic, sticky substance, scientists have found.

The unfortunate workers from this species of tropical termite, Neocapritermes taracua, have two bluish spots visible on the backs of their abdomens. These spots contain crystals made of a copper-containing protein stored in two external "backpack" pouches, write the researchers.

The crystals react with the salivary gland secretions stored in their abdomens to create a droplet of toxic goo that can kill or paralyze worker termites from another species, Labiotermes labralis, an experiment revealed. [Video of Exploding Suicide Termites]

So-called white workers also have the salivary secretions but lack the blue crystals. These workers are less aggressive, slower to burst in battle and the substance they produce is not as effective against their enemies.

They also determined that the blue workers were older by measuring the length of the edge of the termites' mandibles. Termites chew on wood and as they age their mandibles wear down. The larger the blue crystals on a termite, the more blunt its mandibles, the researchers found.

Among social insects like termites, the practice of sending older workers into battle is common, researcher Yves Roisin of Université Libre de Bruxelles in Belgium said in a podcast interview released by the journal Science, where this research is detailed.

"[Among] such insects of course the individual doesn't really count or it counts by the work it can actually do for the colony, and when they are old and probably less efficient they are more likely to sacrifice themselves," Roisin said.

However, the blue workers' suicide gear is highly unusual in the world of insect warfare, because the combination of blue crystals and salivary secretions make it a two-component system, Roisin said, adding that it is also exceptional that one component (the crystals) is carried outside of the body.

So far, the researchers have seen this behavior in this species only, but they hope to see if its relatives do something similar, he said.

The research appears in Friday's (July 27) issue of the journal Science.