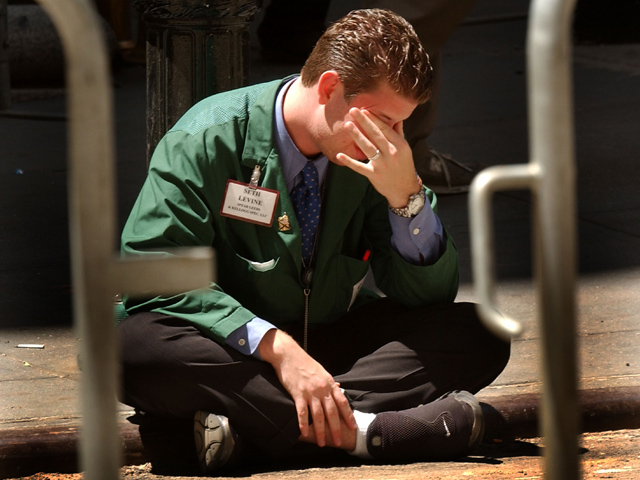 (AP) CERNOBBIO, Italy - Experts and leaders gathered in Italy may disagree on the cure, but the malady seems clear: the world economy faces a "perfect storm" of risks that include prolonged crisis in a structurally flawed Europe, political paralysis pushing America off a "fiscal cliff," a slowdown in the emerging economies drying up the last of global growth, and the spectacularly destabilizing prospect of war over Iran's nuclear program.

A world of such unpredictable peril is also one in which jitters suppress the appetite for private and corporate risk, yielding meager investment and low consumption and prolonging the woes that snuck up on a booming world in the summer of 2007 as a "credit crunch", mushrooming a year later into the Great Recession.

Many attendees at the annual Ambrosetti Forum at Lake Como on Friday fretted about mounting U.S. debt and the Europe's inability to balance electorates' apparent insistence on national sovereignty with the need for regional coherence to salvage the teetering euro.

But economist Nouriel Roubini predicted years of gloom almost regardless of what is decided.

That analysis is rooted in the specific nature of this crisis, a downward spiral in which a financial meltdown largely caused by excess credit was defused by a blast of public spending; that 2009 stimulus, widely credited with avoiding a global depression, pushed some governments too far into the red for the markets' liking — a "sovereign debt crisis"; and this is turn was attacked through severe austerity measures that suppressed spending to the point that countries cannot grow their way back to prosperity.

"History suggests that whenever (there is) a crisis with too much private debt first and public debt second you have a painful process of deleveraging," said the famously apocalyptic New York University professor, a glowering fixture at such international talk-shops.

"That would imply many years, up to a decade, of low economic growth. And guess what? Economic recovery in the U.S. has been unending and in the eurozone and U.K. there's outright economic contraction right now, and that's not going to change unfortunately in the next few years."

The grim prognosis was consistent with new figures released a day earlier by the OECD, a club of the world's richest nations. Its report found that the global economy is slowing and that the G7 economies would grow at an annualized rate of just 0.3 percent in the third quarter of 2012. Furthermore, the OECD found, the continuing eurozone crisis "is dampening global confidence, weakening trade and employment and slowing economic growth" worldwide.

How to fix the eurozone, then? The different views are familiar.

Ali Babican, Turkey's deputy prime minister for economic and financial affairs, bemoaned the lack of a sense of common European interest — alluding to the lack of sympathy in places like Germany for the woes of an economically hammered eurozone colleague like Greece.

Other speakers focused on structural problems such as the "Balkanization" of Europe's banking system, which lacks a central guarantor like America's FDIC.

Increasingly popular is the argument that it is fundamentally illogical to allow a country to blunder into massive debt if it doesn't have the monetary tools to diminish its debt — lacking a currency to devalue.

Roubini said that the only solution was to extend the euro's monetary union in the direction of a banking, fiscal or even political union, at least to the point of having a single eurozone finance minister empowered to veto individual countries' budgets for exceeding a given deficit limit. "Today the eurozone is disintegrating. ... either move forward or you're going to fall off a cliff."

That rankled former Spanish Prime Minister Jose Maria Aznar, who declaimed the idea of "a United States of Europe" as counter to the psychology and history of the region.

"The history of Europe is a history of states," said Aznar, who led Spain from 1996 to 2004, a period of tremendous growth that seems an epoch away. "We must restrict this and not create another thing that does not work."

Better, he said quietly, was to ensure that countries take the "right decisions."

Some applied that label to one decision this week, a bond-buying plan from the European Central Bank that continued to lift financial markets on Friday.

But others noted that the offer by ECB president Mario Draghi is highly conditioned.

"The decision by the ECB is extremely important but ... the ECB is only one instrument (and) if governments do not do their part the ECB will not be able to succeed," said JPMorgan Chase International chairman Jocob Frenkel.

It was easier to find common ground on the question of the United States — with great concerns that country is headed toward another debt-ceiling crisis because regardless of the presidential election outcome Democrats and Republicans cannot agree on how to close a deficit that is digging an ever deeper debt hole.

"The largest economy of the world cannot continue this way without doing any kind of predictability about what is going to happen," said Babican. "We don't know much about the budget of 2012 and we don't know what kind of fiscal policy there will be in 2013. A fiscal cliff is coming."

Also clouding the atmosphere was the slowdown in emerging nations — including China, despite growth there that remains far higher than in the West.

"Seven percent growth may seem high, but for China, which had double-digit growth for 20 years, it really means bad news," said Li Cheng, a China expert from the Brookings Institute. He said there was risk of millions of layoffs which could spark "the largest crisis in (Communist China's) history because it may cause revolution."

The final element of what Roubini described as the "global perfect storm" is the possibility of an attack by Israel or the United States on Iran because "it's clear that negotiations have failed" on stopping Iran's nuclear ambitions. "The last thing the world needs given its fragility is another war in the Middle East and a spike in oil prices," Roubini said.

Israeli President Shimon Peres declined to address the Iran issue but sounded a philosophically optimistic note, suggesting that from his perspective at age 89, crises come and crises go. "Today what we call crisis is more of a profound change that we were not organized to meet properly," he said.

His solution was somewhat deflating to the audience, a graying crowd visibly given to collecting bulky stacks of paper: Hand things over to a younger generation — global, digital, and largely "not so impressed."

"They are better educated, better built, and more up to date."