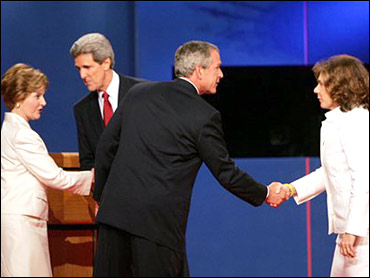 
There was no clear winner in Thursday night's first presidential debate, according to interviews with experts across the country.

"It's more relevant to talk about the winner in terms of expectations," said Shanto Iyengar, a professor of American politics at Stanford University. "Given the fact that this was President Bush's home turf -- national security and terrorism -- he should have dominated. He didn't. It's a positive outcome for Kerry."

Yet winners in debates are determined not in the minutes following, but in the 24 to 48 hours to come.

"Anyone who declares a winner in this debate is a predictable partisan. They both did beautiful," said Larry Sabato, director of the Center for Politics at the University of Virginia.

"I don't view this as a tie," he continued. "I view this as a superb dual presentation that presented the American people with a clear choice and that's really all you can expect from these television extravaganza."

Experts agreed: both candidates performed well. Kerry was presidential; Mr. Bush had a command of facts. But while no one would declare a winner, all agreed Kerry scored points by standing toe-to-toe with Mr. Bush on foreign policy and national security.

"I thought both guys did extremely well. But that means its good news for Kerry," said Norman Ornstein, a political analyst at the American Enterprise Institute. "Kerry's over the bar and he's in the game.

"When you have an incumbent running against a challenger," Ornstein said, "they are looking to see if the other guy can be president." According to Ornstein and other experts, Kerry came off looking presidential.

But, of course, so did President Bush. With 32 days until Election Day, Mr. Bush scored by staying on message. Although visibly perturbed by Kerry's attacks, Mr. Bush was ardent in arguing that the war in Iraq was worth fighting and that he was the best man to lead us in that fight.

"My impression is that very few Americans are going to change their vote. They made their positions clear," said Stephen Hess, a presidential historian at the Brookings Institution. "They in a sense cancelled each other out."

Hess believes that Kerry portrayed himself adequately in a debate focused on international issues, but Mr. Bush did so as well.

And if many Americans deem the debate a tie, there is a sense that Mr. Bush gains by not losing.

"Tactically, I think both men performed strongly. I would not say that there was a strong performance and a weak performance. In that sense you can say there not a clear winner," said Professor William Galston, a University of Maryland political scientist.

"On the strategic level, going into the debate the flow of the debate was in President Bush's direction," Galston continued. "Kerry's goal was to disrupt and reverse that flow. I'm not sure he accomplished this."

All the experts agreed we will know more in the days to come.

"The question in my mind is how did the undecideds interpret his debate," said Sabato. "And that happens over days. It kind of seeps into the undecided consciousness."