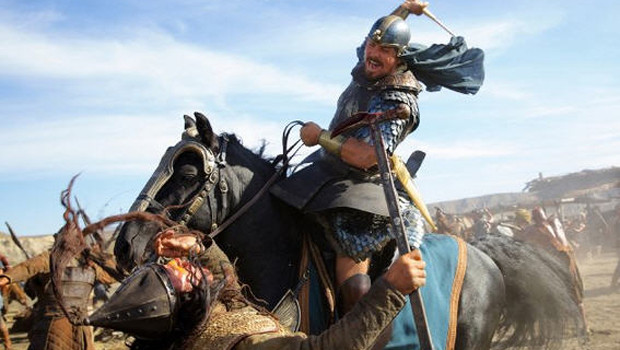 After three weeks of box office dominance, "The Hunger Games: Mockingjay - Part 1" ceded its reign to "Exodus: Gods and Kings."

The biblical epic easily ruled the weekend with a $24.5 million debut, according to box office tracker Rentrak's Sunday estimates, while "The Hobbit: The Battle of the Five Armies" dominated international charts with a staggering $117.6 million from 38 territories in advance of its North America release this week.

With an expensive $140 million production budget, "Exodus: Gods and Kings" met expectations in its first weekend. But it failed to live up to the precedent set by some recent biblically themed films, including "Noah," which opened to $43.7 million in March.

"I think Hollywood is learning that putting epic, biblical stories on the big screen comes at a pretty heavy price. It's not easy to do this," said Rentrak senior media analyst Paul Dergarabedian.

Fox's domestic distribution chief Chris Aronson said he is happy about the performance of his studio's film.

"We're feeling great," Aronson said. "We came in right where our expectations were."

According to the studio, opening weekend crowds for the film were divided fairly evenly down gender lines, but they skewed older with 65 percent over the age of 25.

"It's a very diverse audience," said Aronson, noting that 20 percent were African-American and 18 percent Hispanic. "It's a movie for everyone."

There was a lot of talk about the film leading up to its release. At one point Fox head Rupert Murdoch defended the casting white actors in Egyptian roles.

Also new in theaters, "Top Five," from writer, director and star Chris Rock, opened strongly. The Paramount-distributed comedy took in an estimated $7.2 million from only 979 locations to take the fourth-place spot right behind "Penguins of Madagascar." It co-stars Rosario Dawson, Gabrielle Union, Cedric the Entertainer, J.B. Smoove and others.

"It's exactly what we needed to get this movie up and running," said Megan Colligan, Paramount's president of worldwide distribution. "It gives us the right rhythm to keep building and building. I think it's going to benefit from great word of mouth."

"Top Five" will expand each weekend before hitting 2,000 screens by Jan. 1.

Despite the fact that nearly all expectations were met for this weekend's new openers, it paled in comparison to last year, which saw the opening of the second "Hobbit" film. Also, the overall box office is still down over 5 percent for the year, and the deficit is only growing.

"We're running out of racetrack," Dergarabedian said. "We're not going to have a record-breaking year."

But there is a silver lining, he said.

"For me, the hot spots are in the indie world," said Dergarabedian, noting the impressive five-screen, $300,000 debut for Paul Thomas Anderson's "Inherent Vice," and the stunning growth of awards-friendly films such as "The Imitation Game," "Birdman" and "Wild," which expanded to 116 screens and cracked the top 10 with $1.6 million.