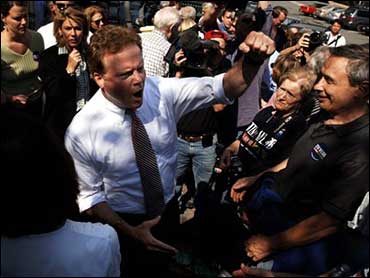 James Webb, a former Reagan administration Navy secretary who left the Republican Party over the Iraq war, won the Democratic nomination Tuesday for the right to take on Republican Sen. George Allen in the fall.

Webb defeated lobbyist and longtime Democratic Party activist Harris Miller after a bruising primary in which voters decided between a traditional and unabashed liberal (Miller) and a former Republican (Webb) whose populist campaign was aimed at so-called Reagan Democrats - namely, rural, white moderates.

The campaign had some definite low points.

In one televised debate, Webb, 60, referred to Miller as "the anti-Christ of outsourcing," claiming that Miller, as a lobbyist for a major Internet-industry organization, helped drive technology jobs overseas. And a Webb flier contained a caricature of Miller with a hooked nose and cash spilling from his pockets. Miller, who is Jewish, called the brochure "despicable"; Webb said it was not anti-Semitic.

With all but one precinct reporting, Webb had 83,156 votes, or 53.5 percent, compared with 72,352 votes, or 46.5 percent, for Miller. Except for the Washington suburbs, turnout was low across Virginia, a state unaccustomed to primaries. The last Democratic Senate primary was in 1994.

Allen is seeking a second term and also pursuing a 2008 bid for president. He had no Republican challenger.

Four other states also held elections Tuesday, including primaries for governor in Maine and South Carolina; a Democratic runoff for the nomination for lieutenant governor in Arkansas; and referenda on constitutional amendments in North Dakota.

Both Democratic candidates in Virginia sought to tie Allen tightly to President Bush, particularly over Iraq. But Webb was seen by some as having particular credibility on military issues because of his background as a decorated Marine lieutenant in Vietnam and later Navy secretary. Webb, who endorsed Allen six years ago, underscored the point by campaigning in desert combat boots.

"We need leadership that will not just follow an administration blindly, but is capable of independent thought," Webb told supporters Tuesday night in Arlington.

Webb's triumph was a victory for Senate Democratic leaders, many of whom either endorsed him or sent him campaign donations. Party strategists calculated that Webb offered the only chance to mount a credible challenge to Allen in the fall, when Democrats hope to win six seats to gain control of the Senate.

Webb said such support was key to his victory. "Everywhere I went, I had to face a room where people wondered if I really was a Democrat," said Webb.

Miller put nearly $1 million of his own money into the campaign and outspent Webb by more than a 2-to-1 ratio.

In other elections around the nation: