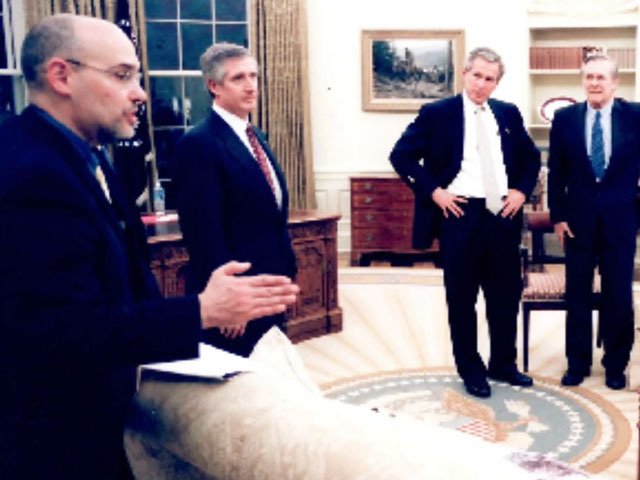 (CBS News) WASHINGTON -- The stakes could not have been higher. The CIA's Luis Rueda briefed George Bush and his top advisers on intelligence that could enable the president to call off the Iraq invasion.

Now retired, Rueda ran the CIA's operations inside Iraq. He believed he knew where Saddam Hussein would be in the next several hours.

"There" was a palatial retreat outside Baghdad known as Dora Farms. Not only was Saddam supposed to be there, but so were his sons Uday and Qusay. A single strike could kill them all and perhaps head off war.

The president asked Rueda how confident he was.

"He asked a lot of questions about the sources, how sure were we, what the odds were," Rueda says. He put a number on the certainty for the president.

That was good enough to prepare to launch unmanned cruise missiles. But then new intelligence came in.

"A source came back and said there is a bunker-like structure inside Dora Farms," he says.

That meant two stealth fighters, each with a two-man crew, would have to drop bunker-busting bombs.

"An 'Oh my God' moment," Rueda remembers. "There's going to be four Americans in planes with absolutely no protection who now have to go in there and do it and get out."

Poll: Majority thinks U.S. should have stayed out of Iraq
Iraq war: Was it worth it?
Bombings in Iraq kill 65 a decade after U.S. invasion

The decision was the president's alone to make. He asked what Rueda thought about whether he should go in.

"I said we should take the strike," Rueda says. "It's a chance. If we're lucky and he's there when we strike, we may save a lot of lives."

The strike went off like clockwork, and we saw the results for ourselves two months later. Every structure was destroyed except the main residence, which had been spared for fear of killing women and children. Our guide, then-Army Col. Tim Madere showed us an enormous crater where the underground bunker was supposed to be.

There was no bunker entrance.

So some of the intelligence was wrong, and we all know Saddam was not killed that night. But was he ever there at Dora Farms? After he was captured Saddam told his FBI interrogators.

From the Archives: Dan Rather reports on the launching of the opening ensemble of "Operation Iraqi Freedom," below.

"He had been at Dora Farms," Rueda says. "But he was long gone before the missiles struck."

The president had ordered the strike delayed until an ultimatum giving Saddam 48 hours to leave Iraq expired. It was 4:42 in the morning Baghdad time when the bombs hit.

"Waiting for the deadline basically meant that we were not going to get Saddam," Rueda says. "He was gone."

What if the president had not waited? We'll never know.