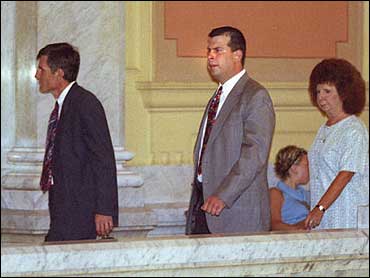 A judge gave a woman the go-ahead Monday to get an abortion after her ex-boyfriend won an extraordinary order that temporarily prevented her from terminating her pregnancy.

Common Pleas Judge Michael Conahan dissolved the temporary injunction issued against 23-year-old Tanya Meyers by another judge a week ago. Conahan also dismissed a lawsuit filed by the ex-boyfriend, John Stachokus, to force her to carry her fetus to term.

A woman's right to have an abortion "is not subject to being vetoed by a woman's husband or partner," said Conahan, who is based in eastern Pennsylvania's Luzerne County. "Neither an ex-boyfriend nor a fetus has standing to interfere with a woman's choice to terminate her pregnancy."

The order preventing Meyers from getting an abortion had outraged abortion rights activists. Meyers is about 10 weeks pregnant.

One of Meyers' lawyers, Susan Fritchey of the Women's Law Project, welcomed the decision issued Monday.

"Her right to privacy has been restored and she is free to go on with her life," Fritchey said. "It's a great relief for her."

John Stachokus, 27, had said he was willing to take full or partial custody of the child and claimed in his lawsuit that Meyers was being pressured by her mother to have the abortion.

The case gained the support of abortion opponents and fathers' rights groups.

"I see it as a very sad case," said Dianna Thompson, executive director of the American Coalition for Fathers and Children. "The woman has the right to choose, which means the child has no right to live and the father has no right to raise this child."

Stachokus' attorney, John P. Williamson, did not immediately return a call for comment.

"We're relieved, but at the same time we're disappointed that it had to go this far," said Elizabeth Cavendish, legal director for the National Abortion and Reproductive Rights Action League. "We hope this won't encourage anti-choice advocates to misuse the litigation process to stand in the way of the execution of a woman's constitutional rights."

Meyers had filed for a protection-from-abuse order from Stachokus, an emergency dispatcher she met 10 months ago. She said he had threatened and harassed her since their breakup on July 22.

Anti-abortion and fathers-rights groups defended the decision made by the court earlier to issue a temporary injunction on Meyers' pregnancy.

"We talk about fathers negatively so often, about how they don't want to be responsible for their children, and this guy is doing everything he can to be sure his unborn child isn't aborted," said Dianna Thompson, executive director of the American Coalition for Fathers and Children. "Men's rights are trampled on all the time when it comes to reproductive rights."