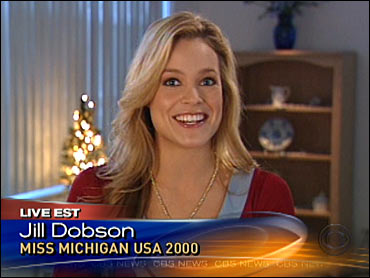 Miss USA may be safe for now, but a former top contender says Tara Conner has disgraced the pageant.

Jill Dobson, who finished in the Top 10 as Miss Michigan in the 2000 Miss USA competition, adds that the scandal that almost cost Conner her crown may well help Conner's career — but at a big price.

Conner agreed to go into rehab and will be allowed to keep her title, Donald Trump announced Tuesday. Trump, who co-owns the Miss Universe Organization, said he had planned to end Conner's reign before he met with her Tuesday morning. But he said he changed his mind after speaking with Conner.

The word came amid widespread speculation that rumored wild partying and other escapades would result in Trump yanking her title.

This year's Miss USA first runner-up, who would have gotten the tiara if Conner had lost it, says she wouldn't have wanted to get it that way and stands behind Conner.

Tamiko Nash, Miss California USA 2006, told The Early Show co-anchor Hannah Storm Wednesday, "If I were in the same situation, I would want a second chance. I would want the benefit of the doubt and to give everyone a chance to know the person I really am. The decision's been made. I support Mr. Trump and the Miss Universe organization, and right now it's about moving forward for myself and for Tara."

Nash, who tried to contact Conner, continued, "My lifelong dream was to be Miss USA. … But this crown is not something I would have wanted at Tara's expense. Her well-being is important, and, thus far, my role as Miss California USA and as first runner-up to Miss USA have opened up a world of opportunities — and, for me, it's about making the most of those. … I am behind Tara. Bottom line, Tara is our Miss USA 2006. I support her, I am concerned about her well-being."

But Dobson, who's now a Star magazine news and style editor at large, told Storm that Trump should have taken the crown from Conner and awarded it to Nash.

"From what I know of Tamiko," Dobson said, "and I haven't met her personally, she seems to be the (kind of) person who wouldn't have gotten herself in that kind of situation. I understand she does volunteer work and has worked as an elementary school teacher, and it sounds like she has a good head on her shoulders. That's the kind of person I want to see as Miss USA."

Dobson dismissed Conner's going to rehab, saying, "I think it is the cliché, 'Oh, I made a mistake, now I'm going to rehab.' At Star magazine, we're always covering celebrities. … Every other celebrity seems to do this. And now, it looks like she's doing it. She stood up there (at her news conference Tuesday), and she wouldn't admit to a drug or alcohol problem, but then she said, 'Oh, I'm checking into rehab.' And I was there covering it, and all the reporters were kind of almost laughing when she said that, because we've all heard that so many times."

What does Dobson think prompted Trump to make the move he did?

"I think Donald felt the situation had gotten out of hand and was a big PR nightmare for him," Dobson responded. "He decided to take control of it, kind of surprise all of us and do what he wanted to do, not what the world was expecting from him.

"But I think she has brought disgrace to the program, based on all these reports, and we keep hearing this excuse, 'Oh, she's a small town girl and grew up in a three-stoplight town.' I grew up in a one-stoplight town, and I've never caused an international scandal. So, I don't think that's an excuse."

Dobson also observed that the last laugh may be Conner's.

"She has gotten a lot of fame, and I know from working in this industry that, a lot of times, fame is the first step to getting a job in the industry, which is the reverse of what it was many years ago, but now it's become that way," she said. "So I'm sure if Tara wanted to go on a reality show or even get some acting jobs, she could probably do it pretty easily at this point, because her name is so well-known and so out there. But, that comes with paying the price of being out there and being part of a scandal, which is definitely a tradeoff. I think it's better to be slow and steady and hone your craft a little bit, instead of just jumping into the limelight with a negative connotation like this."