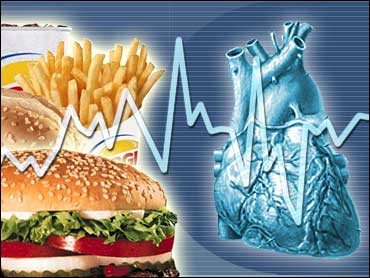 Eating just one fatty meal can have a major impact on your arteries — for better or for worse.

So says a new study that shows eating a meal high in saturated fats, like a cheeseburger and fries, can reduce the ability of the body's "good" HDL cholesterol to protect against clogged arteries.

However, a single meal high in heart-healthy polyunsaturated fats, like those found in sunflower and corn oil, can have the opposite effect, helping protect the arteries from plaque buildup.

"It's further evidence to support the need to aggressively reduce the amount of saturated fat consumed in the diet," says researcher Stephen J. Nicholls, MBBS, PhD, PRACP, FACC, a cardiologist at The Cleveland Clinic in Ohio.

"This study helps to explain the mechanisms by which saturated fat supports the formation of plaques in the arterial wall, and we know these plaques are the major cause of heart attack and stroke," Nicholls says in a news release.

Saturated fats are mostly found in animal products like butter, red meat, and lard. But they are also found in some plant products, such as coconut and palm oils.

Polyunsaturated fats are primarily plant-based and include safflower, corn, and sunflower oils. They are usually liquid at room temperature.

In the small study, published in the Journal of the American College of Cardiology, researchers looked at the effects on 14 healthy adults of eating a meal high in saturated fat or polyunsaturated fat. Study participants had such a meal on two separate occasions, one month apart.

Each meal consisted of a slice of carrot cake and a milkshake made with either saturated or polyunsaturated fat.

The meals were tailored to each participant and designed to contain 1 gram of fat for every 2.2 pounds of body weight. That amount of fat is equivalent to a double cheeseburger, a large order of fries, and a large milk shake for a 150-pound person.

The researchers found that three hours after eating the saturated fat meal, the endothelium, or inner lining of blood vessels, in study participants showed reduced ability to expand and increase blood flow.

Six hours after the meal high in saturated fat, the "good" HDL cholesterol's protective ability to prevent inflammation was also impaired, the researchers found. Inflammation has been linked to plaque buildup in the arteries.

In contrast, six hours after eating the meal high in polyunsaturated fats, HDL's protective effects were enhanced. The researchers found fewer inflammatory agents in the participants' arteries than they did after the saturated fat meal.