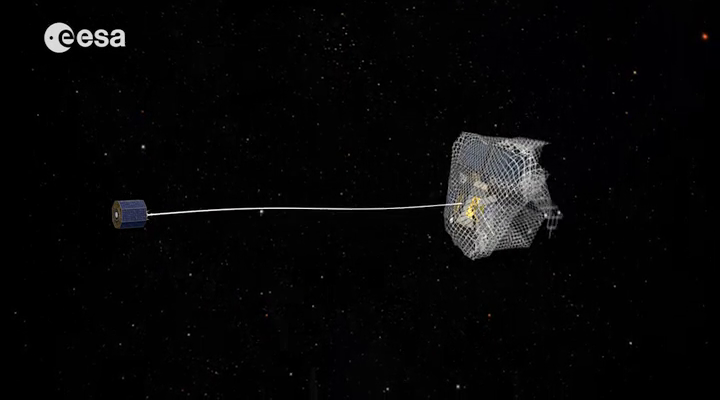 To bring down dead satellites, the European Space Agency is considering a very low-tech solution.

It is testing out the idea of deploying fishing nets in space to capture them. It's part of a global campaign to rid space of the kinds of debris that wreaked havoc in the movie "Gravity" and pose a safety hazard to space missions.

The problem of space debris has caught the attention of several nations, but no one has settled on an ideal solution yet.

Within the U.S. Department of Defense, the Joint Functional Component Command for Space (JFCC-Space) currently tracks 23,000 objects in low-Earth orbit. NASA officials have estimated that roughly 500,000 pieces of space junk larger than a marble circle the planet, and there could be more than 100 million tiny fragments, some as small as flecks of paint, that race around Earth at blistering speeds of 17,500 mph.

Japan launched a mission last year that included a magnetic net that acted as a trash bag of sorts to remove debris.

ESA's nets are just one option being considered by the the agency as part of its Clean Space initiative, which aims to reduce the impact of the space industry on the terrestrial and orbital environments. Among the other candidates the ESA is looking at are a robotic arm, a harpoon and an ion beam.

"The main advantage of the net option, whether for e.Deorbit or other debris removal missions in future, is that it can handle a wide range of target shapes and rotation rates," Wormnes said.

So far, the agency has attempted to snag mock satellites inside an airplane while it flew maneuvers that created brief periods of weightlessness.

"We shot nets out of a compressed air ejector at a scale-model satellite," ESA engineer Kjetil Wormnes said. "The good news is they worked extremely well - so much so that the nets usually had to be cut away with a knife before we could shoot again."

Wormnes said the simulations would be used "to design the full-size nets for a debris removal mission" which then could be put on ESA's e.Deorbit mission in 2021. That mission will test the feasibility of removing a large item of debris, such as derelict satellites or upper stages from rockets.