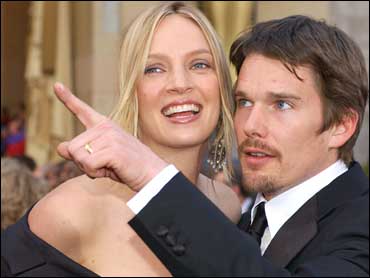 Ethan Hawke, whose split from Uma Thurman caused a tabloid frenzy, says being part of a celebrity couple can be hard on the ego.

"It's unfair when one person's career is taking off and the other is really suffering," the 36-year-old actor tells AMC's "Shootout" in an interview slated to air Sunday.

"What happens -- it's not that they're jealous of each other; it's that the person you share your life with isn't in the mood to support," Hawke says. "You want to have a pity party for yourself, but they're off to the Golden Globes and you don't want to go because everyone is going to think you are jealous."

Hawke and Thurman were married in 1998. She filed for divorce in
2004. The couple have two children.

"There's a certain geometry to life -- that life has a certain math equation to it and if you're never together, you can't build a home," Hawke says. "Joanne Woodward put her career on the back burner for that marriage (to Paul Newman) to last. And something's got to give."

Hawke received an Oscar nomination for his role in 2001's "Training Day." His film credits also include "Dead Poets Society," "Great Expectations" and "Before Sunset."

Thurman, 37, has starred in "The Producers" and the "Kill Bill" movies. She was nominated for an Oscar for her role in 1994's "Pulp Fiction."