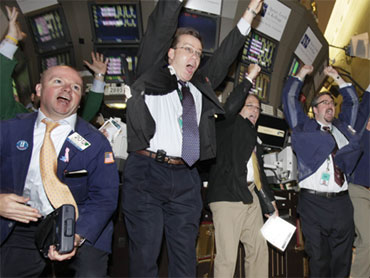 Even though the United States' dramatic World Cup victory over Algeria came on a weekday morning, people who wanted to follow it were able to.

More than 1 million people tracked the match online and on mobile devices, according to ESPN, which streamed the game and provided running updates on its websites.

The success across all platforms for a daytime event could have implications for how future Olympics are shown in the U.S., too, with ESPN and corporate partners possibly interested in taking over from NBC after the 2012 Summer Games.

ESPN said 1.1 million people watched at least some of the USA's 1-0 win as it was streamed on an ESPN website Wednesday. The match, which was also watched on ESPN and Univision by 8.6 million people, lasted from 10 a.m. to noon EDT, during working hours for most of the United States.

The network says it was the biggest online audience for a sporting event, beating the Duke-Butler NCAA championship basketball game on a Monday night from earlier this year.

However, CBSSports.com said that their biggest online audiences come during the first round games.

"With that in mind, it was incorrect for ESPN to assume the Duke-Butler championship game, which was viewed by 48 million people on CBS Television in primetime, would produce the largest online number for the tournament," a CBSSports.com statement read.

The World Cup match from South Africa was a throwback to a time when not all major sporting events happened during television's prime-time. Only an older generation remembers listening to World Series games on transistor radios at work or school.

President Barack Obama, when he called the U.S. team to congratulate it, said he was meeting with Gen. David Petraeus at the time of the goal, and could hear the rest of the West Wing erupt in cheers.

The same scene was repeated in workplaces and bars after a match of mounting tension and frustration was capped when Landon Donovan scored a goal with about two minutes to spare, saving the U.S. team from elimination.

It's also part of a remarkable week in U.S. sports that included the most-watched NBA game in 12 years, and an epic Wimbledon match between two unknown men that stretched to three days and earned ESPN its second best Wimbledon ratings since it began covering the tournament in 2003. Oh, and the U.S. Open golf tournament.

"Multitasking is in full force in the U.S.," said George Bodenheimer, president of ESPN and ABC Sports. "This just shows the power of sports. When you have great, live sporting events that capture the imagination of the American public, people want to see it regardless of what time of day it's on."

The television audience size for Wednesday's soccer game was impressive enough. It would have been enough to land the game in last week's prime-time Nielsen Co. top 10 - highly unusual for a weekday morning.

At one point, 1.7 million people were logged on to the general ESPN.com website to check score updates and other news. Some 650,000 people watched the game on mobile devices. Both are figures that haven't been reached before, ESPN said.

Because the United States' next game, against Ghana, will take place on Saturday and shown on the ABC broadcast network, viewership is likely to climb even more.

"There's a tremendous buzz and we expect that buzz to continue throughout the tournament," Bodenheimer said.

ESPN and its corporate partner ABC have already expressed interest in televising the Olympics after the 2012 Summer Games in London, the last in NBC's current rights contract. There's a stark philosophical difference in how NBC and ESPN view coverage - NBC holds the best events to show them by tape delay in prime-time if they are not scheduled in those hours, while ESPN believes in showing events when they happen.

"Our theory is that sports are best enjoyed live," Bodenheimer said. "The way the world is working and with all of the devices available to people, it's all about live."

ESPN and ABC are owned by the Walt Disney Co.