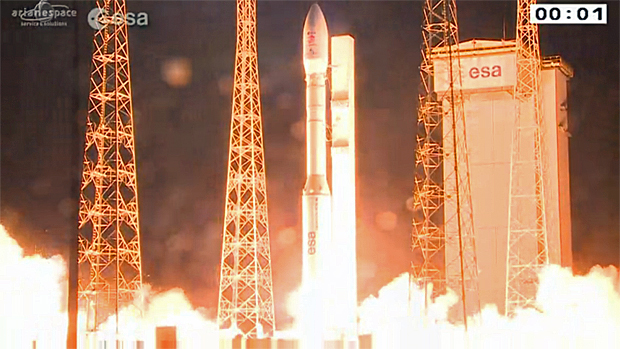 A Vega rocket blasted off from French Guiana late Wednesday, boosting a sophisticated spacecraft into orbit for the European Space Agency to test techniques for measuring elusive gravity waves, the yet-to-be-detected ripples in the fabric of spacetime generated by accelerating masses like colliding black holes.

The slender rocket, made up of three solid-fuel stages and one restartable liquid-propellant upper stage, roared to life and vaulted away from the European Space Agency's Guiana Space Center at 11:04 p.m. EST (GMT-5), lighting up the night sky for miles around as it climbed toward orbit.

Discarding its first three stages one after the other, the Vega's fourth stage ignited about seven-and-a-half minutes after launch for a nine-minute burn to put the LISA Pathfinder payload into a preliminary transfer orbit.

After an 85-minute coast, the fourth stage was expected to fire a second time to propel the payload into an elliptical orbit with a high point, or apogee, of about 960 miles and a low point, or perigee of around 130 miles.

Launch was delayed one day to give engineers time to assess the temperature extremes the upper stage would experience during its long coast but in the end, they decided the rocket was up to the task and the launch team was cleared to proceed with Thursday's launching.

The LISA Pathfinder spacecraft was expected to separate from its upper stage about an hour and 45 minutes after liftoff. Six firings by the spacecraft's propulsion module will be required through Dec. 12 to put the vehicle onto a trajectory that will carry it to the L1 Lagrange point a million miles from Earth. The propulsion module then will be discarded.

The goal of the $630 million ESA-led mission is to test techniques for measuring gravity waves produced by colliding black holes and other cosmic phenomena by using a laser to precisely measure the relative motion of two freely floating 1.8-inch-wide cubes inside the body of the spacecraft.

In a full-scale mission with multiple spacecraft stationed millions of miles apart, passing low-frequency gravity waves should cause reference masses to bob ever so slightly as specified by Albert Einstein's general theory of relativity. The Pathfinder mission is intended to test the techniques needed to measure those slight motions.

"This is a rather special one for ESA, and unlike any previous spacecraft in the science program, this one will not look at the stars and galaxies, and not even explore other planets in the solar system," ESA science director Alvaro Gimenez said before launch. "This mission will do something very different. It will follow a solid cube of gold-platinum while it moves under the influence of gravity, at the same time shielding it from every other disturbance possible.

"Why should we want to do this? Why should we want to such a curious thing? To blaze a new path, as the mission name says, through uncharted territory, establishing a path toward a fascinating goal, one that will open a new chapter in science, the study of gravitational waves."

Gravitational waves, he said, are a "direct prediction of the general theory of relativity, but they are yet to be directly detected."

"Gravitational waves are ripples in the curvature of space-time, but they are very weak, and one needs a very quiet sensor," Gimenez said. "LISA Pathfinder is flying the quietest, most sensitive sensor of motion ever, a key building block for gravitational missions."

The measurements are extraordinarily difficult. To detect the gravitational waves generated by supermassive black holes colliding, for example, scientists must be able to detect changes on the order of one one-hundredth the size of an atom.

That's one daunting challenge. Another is making sure the bodies being measured are shielded from external forces and that the spacecraft can compensate as required. The spacecraft, in effect, flies around the path of the floating test cubes, said Cesar Garcia Marirrodriga, the LISA Pathfinder project manager.

The laser used to measure the motions of the cubes is able to detect changes as small as one thousandth of one millionth of a millimeter.

Even so, the Pathfinder mission is not capable of detecting gravity waves because the distance between the test cubes is so small and the effects of passing low-frequency gravity waves too small to produce measurable results.

But if the technology works, a full-up, much more expensive gravity wave mission -- LISA -- could be attempted in the 2020s or 2030s, using three spacecraft stationed three million miles apart, each one harboring a laser-monitored floating test body. By timing changes in the motions of the reference masses, scientists could detect passing gravity waves.

"All of us would rather be launching LISA, and being ready to do the astrophysics data analysis in addition to all the instrumental work," Ira Thrope, a NASA researcher with the LISA Pathfinder science team, told Spaceflight Now. "The prime objective of this is technology demonstration, but it's more than just a yes-no answer. You don't just go up and say, 'Yep, it worked, we're done.' What we really want to get out of this is a model for how these kinds of precision accelerometers operate in space.