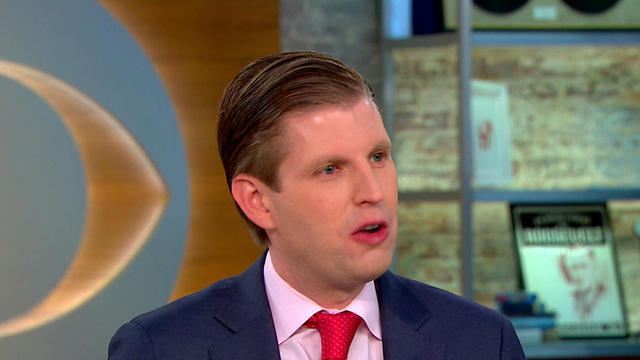 Eric Trump predicted Tuesday that his father will win key battleground states like Florida and Nevada in the presidential election.

In an interview on “CBS This Morning,” the younger Trump said his father’s campaign is “going to do great” as voters head to the polls to cast their ballots.

Asked if he predicts his father will win Florida, Eric said, “I really do because frankly everywhere I go, there’s thousands of people that show up.”

He added that everywhere he’s traveled, the “enthusiasm is incredible” and he said, “I don’t see a single Hillary sign.”

“People are just sick and tired of Washington, D.C.,” he said. “People want to get rid of these career politicians.”

Even if Trump wins Florida, he would also need to win states like Ohio, Michigan and Pennsylvania.

“There are six or seven different routes including Nevada, which traditionally never goes red, but I think it’ll go red this election cycle,” he said.

Asked why his father said on the eve of the election that a loss would mean the campaign was a big waste of time, Eric said, “My father is a winner. He believes in winning. His whole life he’s won.”

He wouldn’t say if his father would want to play a big role in American politics if he loses and if he would still lead the movement he created.

“I don’t know if you shut down that movement,” he said. “I think America is fed up.”