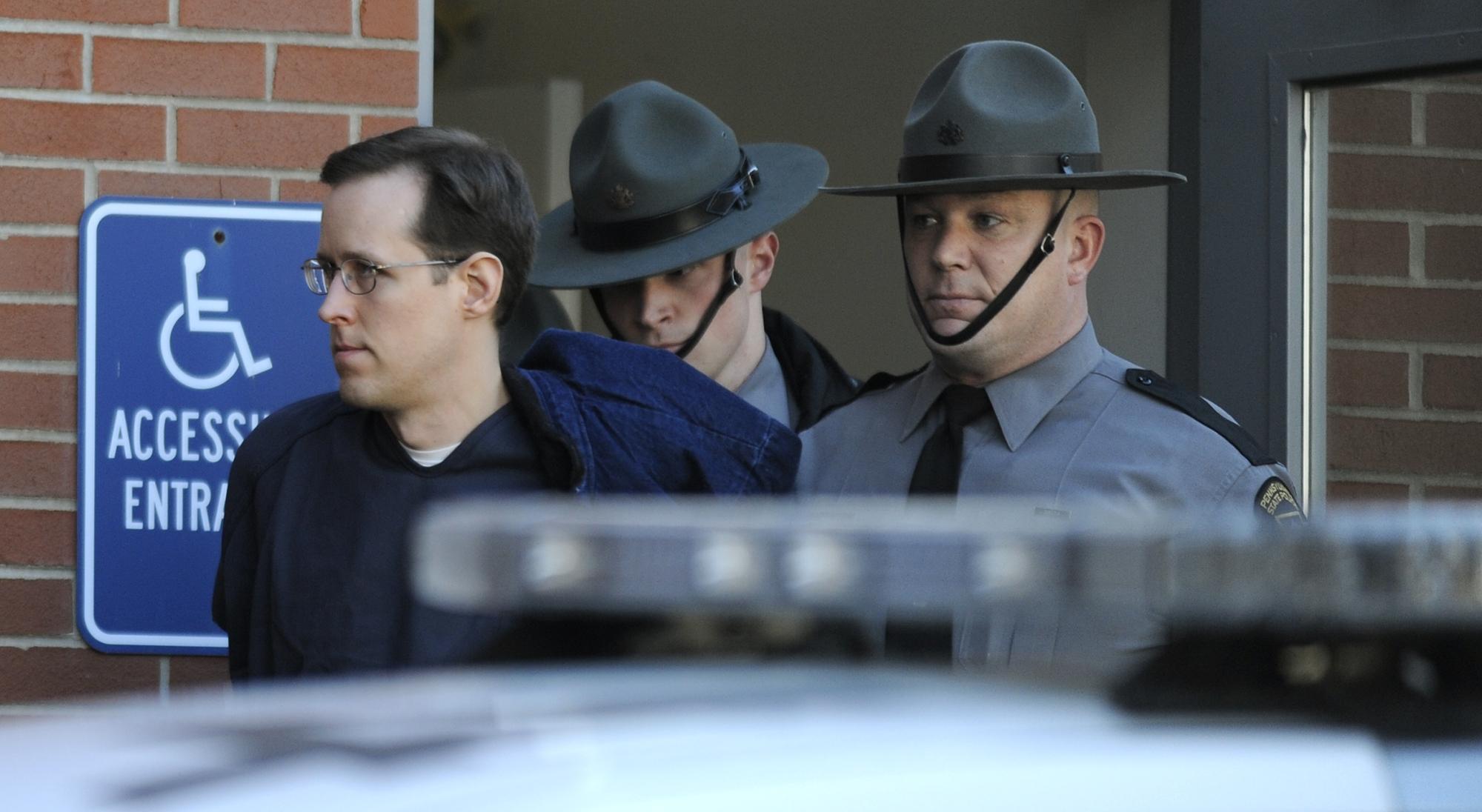 MILFORD, Pa. -- A Pennsylvania man who hid in the forest under cover of night and opened fire with a sniper’s rifle was convicted of capital murder Wednesday in the ambush slaying of a state police trooper he targeted at random in hopes of sparking a revolution.

A jury convicted Eric Frein, 33, in the Sept. 12, 2014, attack at the Blooming Grove state police barracks in northeastern Pennsylvania. Cpl. Bryon Dickson II, a married father of two, was killed, and a second trooper was shot through the hips and left debilitated.

Frein was “literally hunting humans” when he peered at his targets through a scope during a late-night shift change and squeezed the trigger four times, Pike County District Attorney Ray Tonkin told jurors in his closing argument. He called Frein a terrorist who sought to change the government through bullets and bombs.

The gunman led authorities on a 48-day manhunt through the rugged Pocono Mountains before U.S. marshals caught him at an abandoned airplane hangar more than 20 miles from the barracks.

After a two-week trial that presented uncontested evidence of Frein’s guilt, the jury convicted him on all 12 charges, including murder of a law enforcement officer, terrorism and two weapons of mass destruction counts related to small explosive devices he left in the woods while eluding capture.

Frein showed no emotion as the verdicts were read. The trial now moves into a penalty phase, with the same jury deciding whether he deserves the death penalty or life in prison without parole.

The verdict was expected after prosecutors presented more than 500 pieces of evidence tying Frein to the ambush. His DNA was found on the trigger of the murder weapon, and police recovered several handwritten notebook pages at Frein’s campsite in which he described the attack and his subsequent escape into the woods in chilling detail, writing how he shot Dickson twice and watched him fall “still and quiet.”

In his closing argument Wednesday, Tonkin called Frein “a terrorist with murder in his heart, a plan in his mind and a rifle in his hand.”

Frein shot Dickson in the chest and through the shoulders and spine from a distance of 87 yards, waited nearly 90 seconds until Trooper Alex Douglass came to Dickson’s aid and then shot him, too, Tonkin said.

Palmer told jurors that she had just arrived for her 11 p.m. shift when she heard a gunshot. She opened the door and found Dickson, whose shift was ending, on his back, looking up at the night sky and mouthing “help me.”

Palmer told the jury that after Dickson asked her for help, she ran back inside to try to alert others, then returned to ask him what had happened.

“I’ve been shot. Drag me inside,” he managed to say, Palmer testified.

“I looked at him and told him, ‘I can’t,’” she recounted tearfully.

Prosecutors showed surveillance video of the shooting, which showed Dickson falling to the ground, followed by Douglass, who had knelt beside his mortally wounded comrade. Douglass then crawled into the lobby on his stomach -- his legs immobilized by the gunfire -- where a trooper dragged him through a doorway and out of sight.

Other troopers drove a patrol SUV into the parking lot and used it as a shield so they could drag Dickson into the barracks and begin attempts to save his life.

The defense offered no evidence or testimony and conceded the government’s overwhelming case for conviction.

The defense will now shift its focus to trying to persuade the jury to spare his life. Prosecutors will argue that Frein deserves to be sent to death row.

A death penalty verdict would send Frein to death row, but the state has a moratorium on executions under Democratic Gov. Tom Wolf. Pennsylvania’s last execution was in 1999, and it has executed only three people since the U.S. Supreme Court restored the death penalty in 1976.

Police linked Frein to the ambush after a man walking his dog discovered his partly submerged SUV three days later in a swamp a few miles from the shooting scene. Inside, investigators found shell casings matching those found at the barracks as well as Frein’s driver’s license.

The discovery sparked an expansive manhunt that involved 1,000 law enforcement officials and spanned more than 300 square miles. The dragnet shut down schools and roads and hurt businesses in the mountainous region that leans heavily on tourism. At times, police ordered residents to stay inside or prevented them from returning home as they pursued tips and supposed sightings. Trick or treating was canceled.

Frein spent more than a month hiding out at the hangar, using a laptop and pilfered Wi-Fi to follow news of the search. He also worked on a letter to his parents, writing that “only passing through the crucible of another revolution can get us back the liberties we once had.”

Frein added: “Tension is high at the moment and the time seems right for a spark to ignite a fire in the hearts of men. What I have done has not been done before and it felt like it was worth a try.”