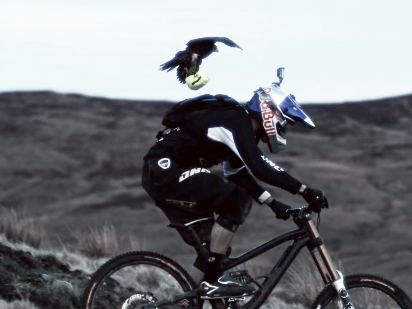 (CBS News) Man (hu-man!) versus the wild is a concept depicted throughout literature, movies and television. It's an age-old conflict highlighted in such cases as the literary classic "Moby Dick", the Oscar-nominated film "Cast Away" and popular reality series "Survivor". (I do work for CBS, and it is iconic at this point.) But have you seen it play out from both perspectives? Watch a downhill mountain bike legend take on a peregrine falcon starting with the bird's view above.

So, yes, nature happens to win this round. But who really cares when everyone wins just by watching? The epic race between man and bird comes from a collaboration between Red Bull and Earth Unplugged, with the falcon's perspective by Earth Unplugged who write:

Downhill mountain bike legend, Gee Atherton, is hunted by the fastest bird in the world, a peregrine falcon. Set in the epic landscape of Antur Stiniog, North Wales, Gee is tested in the ultimate experiment between man and bird.

Up next, you've gotten a "hawk's eye view," so it's time to shift over to the species you more readily recognize in the mirror: man! (Specifically, male professional cyclist Gee Atherton.) See what the battle against nature looks like from his perspective in the video below from Red Bull.