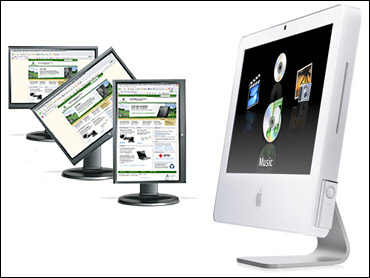 My eyes are almost falling out of their sockets as I switch my attention back and forth between two new personal computers designed for both entertainment and productivity. The new iMac G5 with its built-in, 20-inch flat panel monitor is proof, once again, of Apple's ability to stuff a great deal of technology into a relatively small package.

The Gateway FX400XL with Microsoft Windows XP Media Center Edition is far from petite, but it is incredibly versatile and powerful. Like the Mac, it can play CDs, DVDs, MP3 music and display your photos, but it's also a TV set and Tivo-like personal video recorder. It's also one of the fastest PCs on the market with Intel's newest processor and has a whopping 500 gigabytes of hard drive space.

Visually, the all white iMac G5 is stunning. Like its immediate predecessors, the entire computer is built into the monitor case, which is only 1 ½ inches thick. There are no bulky boxes to sit on your floor or your desk. The case that houses the 20-inch (diagonal) monitor and the computer is 19 inches wide and 16 inches high (not counting the stand), but the screen itself is 17 by 10 ½, leaving just under 5 inches on the bottom for, I suppose some electronics.

The optical drive, which reads and writes both CDs and DVDs, is also hidden inside the case. All you see is a slot on the right side of the unit.

Like the Gateway (and other Windows Media Edition PCs) the new iMac comes with a remote control, but once again less is more. Apple's is tiny: 3 ¼ by 1 ¼ inches and only a ¼ inch thick. It looks more like an iPod shuffle than a remote and it works like one as well. There are only six buttons including a menu button and other controls laid out in a circular pattern like the iPod controls.

10 most walkable cities in the United States

And the resemblance to the iPod doesn't end there. When you use the remote to play a video or music, the interface is extremely iPod-like.

Click here to check out Larry Magid's
podcast analysis of the new Apple and Gateway PCs.

This is the first Mac to be bundled with Apple's new Mighty Mouse, which, finally, has buttons and a scroll wheel. The rest of the hardware is also up to snuff with a 250 gigabyte hard drive, 512 MB of memory and a reasonably fast ATI X600 graphics card.

But there's more. The new iMac also has an iSight camera with a built-in lens in the case. PC cameras, sometimes called webcams, are cheap and easy to install but there's something nice about having one built-in and not taking up any extra space.

Of course, the big thing about the Mac is its software and, once again, Apple came up with a couple of nice touches. To support that camera, the system now comes with Photo Booth which lets you - or you and a very small group of friends - take your own picture, much like those photo booths you see at amusement parks. You can get a normal picture or add all sorts of effects. It's cute and amusing but I suspect most people will quickly tire of the novelty. On a more practical note, that same camera can also be used for video conferencing though Apple's bundled iChat software.

The defining software for this machine is Front Row, a program that enables users to sit back with the remote control to view DVDs, home videos from the hard drive, music videos and TV shows downloaded from the Internet and, of course, listen to music.

The combination of that nice little remote and this incredibly intuitive software makes the experience about as hassle-free as you can get.

Although serious music listeners and movie watchers will want to plug in an external sound system, Apple was considerate enough to build in speakers giving you a full multimedia experience right out of the box with minimal setup. In fact, all you need to do to start using this machine is to plug in the keyboard and mouse and the electrical plug. There's nothing else to do - it even has built-in WiFi networking and Bluetooth, to wirelessly connect peripherals.

What's missing in the iMac is a TV tuner and the ability to record TV shows to the Mac's hard drive. The Gateway and all other Media Center PCs do just about everything that Mac does (with the possible exception of the built-in camera) and they offer the ability not only to watch TV but record your favorite shows.

The Media Center software, which you can access from the mouse or keyboard or from a remote control, has a "My TV" option that lets you browse through a program guide to pick shows you want to watch or record. Unlike TiVo and most other personal video recorders, there is no monthly charge for the automatically updated program guide. It's downloaded from the Internet for free.

Beyond that, the feature set of Media Center PCs is not that different from what you get with the Mac. One difference, however is the remote control which, on the Gateway and most other machines I've seen, looks like a typical multi-function remote control. Gateway's actually is smaller and easier to use than many but it's still a lot bulkier than Apple's.

One nice thing about the Media Center PC is that all of the controls can also be entered with the mouse and keyboard, just in case you misplace that remote.

Gateway's 21-inch flat panel monitor is very impressive. It comes on a stand that gives you a great deal of control over the height, but it can also swivel into portrait position, which is very handy for graphic designers. The PC and the screen use a DVI (digital video interface) adapter which makes it compatible with high definition TVs and tuners.

The screen also supports picture-in-picture, so you can watch TV and do your spreadsheets at the same time, and it has a resolution of up to 1680 x 1050 pixels.

The rest of Gateway's hardware is also pretty impressive. This machine justifies its price with two gigabytes of memory and two 250 gigabyte internal hard drives for a total of 500 GB of storage – enough for even the most demanding music and movie fans. It comes with Intel's latest Pentium D Processor 830 running at 300 gigahertz which is more than fast enough for all but the most obsessively demanding gamers and enough to dazzle the rest of us.

If you're thinking about this machine, make sure you have plenty of room. My one complaint is that the case is quite big: 16.8 inches high, 8 inches wide and 17.5 inches deep. The good news is that the fan is almost silent.

A syndicated technology columnist for more than two decades, Larry Magid serves as on air Technology Analyst for CBS Radio News. His technology reports can be heard several times a week on the CBS Radio Network. Magid is the author of several books including "The Little PC Book."
View CBS News In
CBS News App Open
Chrome Safari Continue
Be the first to know
Get browser notifications for breaking news, live events, and exclusive reporting.