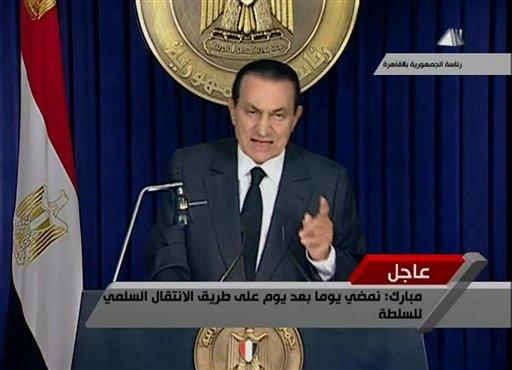 DUBAI, United Arab Emirates (AP) - For political figures in exile, the United Arab Emirates has been a luxury refuge, a base for plotting attempted comebacks and - for at least one unable to escape assassins - a final stage. There is no shortage of speculation that Egypt's Hosni Mubarak could join the list.

The Dubai-based network Al-Arabiya reported Saturday that the former Egyptian president was making plans to head to the Emirates. A Kuwait daily, Al-Qabas, said Friday that UAE officials have offered Mubarak haven in Al Ain, a desert city near the Omani border.

UAE officials have made no public comment on the reports, which were so persistent that the UAE's state news agency WAM issued a rare denial Sunday of bulletins that Mubarak's plane had landed in the Sharjah emirate north of Dubai.

But it wouldn't be out of character to open their doors to a former leader with few options at home - just as neighboring Saudi Arabia did for toppled Tunisian ruler Zine El Abidine Ben Ali last month and Uganda's Idi Amin in 1979.

The roster of Emirate exiles includes former Thai Prime Minister Thaksin Shinawatra, the late Pakistani ex-Premier Benazir Bhutto and a turncoat Chechen warlord who was gunned down by a killer with a gold-plated pistol.

Just hours before stepping down, Mubarak and his family fled Cairo to a walled compound in the Red Sea resort of Sharm el-Sheikh. Their next move is unknown. In his last nationwide address on Thursday, the 82-year-old Mubarak said he would "die on the soil of Egypt."

But he also vowed in the same speech to remain in office until elections later this year. Suddenly, the prospect of seeking sanctuary abroad seemed more likely and the UAE is the option most mentioned in Arab media reports. Another possibility is Germany, where Mubarak underwent gall bladder surgery last year.

"It wouldn't be a surprise if Mubarak ends up in the UAE. They've taken in others before," said Theodore Karasik, a regional security expert at the Institute for Near East and Gulf Military Analysis in Dubai. "The UAE was a loyal friend of Mubarak and this would be a reflection of that."

Yet a possible offer to host Mubarak comes with risks attached for the tightly controlled Emirates.

It could shine a harsher light on the country's two faces: huge wealth and ambitions in places such as Dubai and Abu Dhabi, but a virtually closed political system that gives no room for public protests or dissident.

There are also the demands to track Mubarak's money. Any Egyptian investigation into allegations that state wealth was looted would likely bring scrutiny on Dubai, whose once-booming property markets and international banking hubs have been drawn into other anti-corruption investigations, including one involving Afghanistan's Kabul Bank.

"It's expected that Dubai would be brought into probes of Egyptian assets linked to Mubarak and his clan," said Karasik. "Hosting Mubarak would just bring more attention to the UAE and bring it faster."

A decade ago, that would have been enough to scare off the UAE's ruling sheiks. The UAE tried hard to make as few diplomatic ripples as possible while building its reputation as a crossroads for global aviation and commerce.

Recently, however, the Emirates has shown greater confidence. It took a prominent role in aid to Pakistan after last year's devastating floods and has won praise from Washington for tighter enforcement of economic sanctions on Iran at the UAE's ports and financial networks.

In a statement late Friday, the UAE said it has "confidence in the ability" of Egypt's armed forces to manage the affairs of the country "in these delicate circumstances." It gave no hint, though, that it could offer Mubarak haven as it's done with others.

The Pakistan links run the deepest.

Bhutto spent part of her eight-year self-exile in Dubai before she returned home and was assassinated in December 2007. An ex-Pakistani leader now being investigated in connection with her slaying also has a base in the UAE.

Former Pakistani President Pervez Musharraf - who earlier this year was meeting reporters in Dubai - was named in an arrest warrant Saturday as part of a preliminary investigation in Pakistan. Musharraf's whereabouts were unclear, but he has repeatedly denied any role in Bhutto's death.

Bhutto's widower, Asif Ali Zardari, is now Pakistan's president. He also reached out to UAE officials to allow his family long-term refuge if he died or was killed, according to a secret U.S. diplomatic cable released by WikiLeaks in January.

Thailand's deposed Prime Minister Thaksin has also spent considerable time in Dubai since leaving his homeland after a military coup in 2006. Reports from Thailand - though never confirmed - said he often took part in morning walks through Dubai's vast malls for exercise.

Thaksin has been keeping a far lower profile since offering interviews in 2009 to the international media, including The Associated Press.

He broke the tacit rule set by the UAE for its exiles: keep quiet. The UAE frowns deeply on any kind of political activism within its borders, including by exiles and others targeting their rivals at home.

Even the huge Iranian community in Dubai has been under a clampdown against demonstrations or rallies since the political turmoil unleashed by the disputed re-election of President Mahmoud Ahmadinejad in June 2009.

Erik Prince, the founder of the former Blackwater private security firm, moved to Abu Dhabi last year and has made no public statements or appearances. Prince has been linked to militia training in Somalia, but his spokesman has said he is only providing advice to several anti-piracy operations.

The speculation about Mubarak's possible passage to the UAE was bolstered in some Arab media by the visit of the UAE's foreign minister to Cairo just days before Mubarak stepped down.

But Christopher Davidson, an expert in Gulf affairs at Britain's University of Durham, believes it was "a mistake for the UAE to get involved" at a time when the Arab world is basking in the power of popular protests.

"Both countries, Saudi Arabia and the UAE, were identified with the old Middle Eastern order," Davidson said. "That does not sit well with the UAE young population."

The UAE, meanwhile, has faced some messy spillover from its growing international stature.

Chechen strongman Sulim Yamadayev was gunned down in March 2009 in a beachfront parking lot. A gold-plated pistol was left near the body.

Yamadayev switched sides in the conflict between Chechen rebels and the Russian government. He later fell out of favor with Chechnya's Kremlin-allied president and made his way to Dubai.

Nine months after the slaying, another killing reinforced Dubai's reputation for intrigue. Hamas commander Mahmoud al-Mabhouh was found dead in his hotel room in January 2010 in a murder Dubai police blamed on a hit squad from Israel's Mossad secret service using disguises and fraudulent passports.

"I do not think Mubarak wants to leave Egypt," Davidson said. "But you never know how the wind will blow during a revolution."