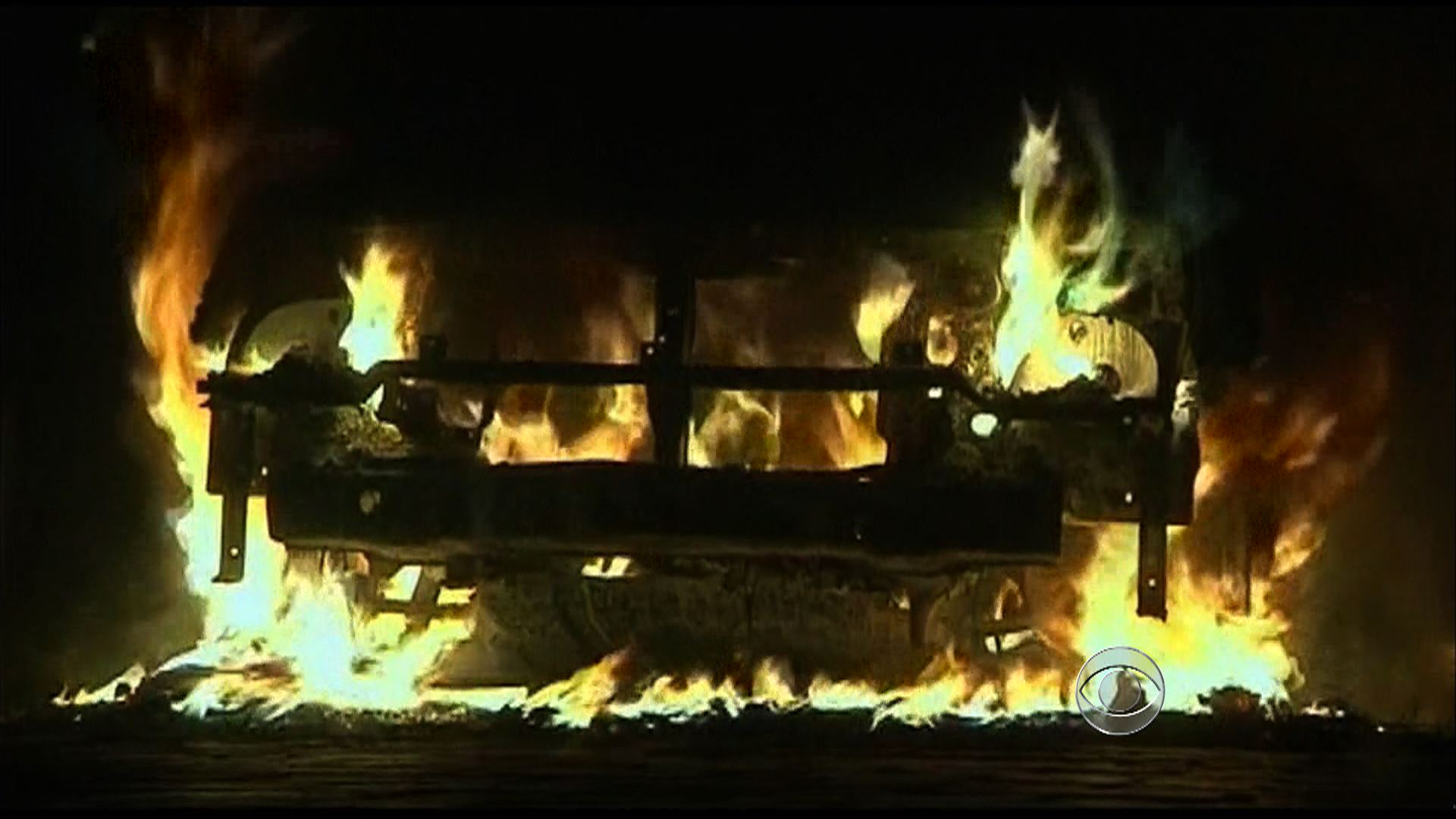 As House Republicans piece together the events in Benghazi, Libya on Sept. 11, 2012, that led to the death of four Americans, the focus has fallen on the talking points the Obama administration used to describe the attack in the days following.

The talking points were revised numerous times before United Nations Ambassador Susan Rice used them on political talk shows on Sept. 16. While the White House says the changes were merely stylistic, the changes suggest administration officials were interested in sparing the State Department from political criticism in the wake of the attack.

CBS News has learned there was a flurry of approximately 100 interagency government emails on Sept. 14 and Sept. 15 regarding the content of the talking points to be released to members of Congress regarding the Sept. 11 terrorist attacks that killed U.S. Ambassador Christopher Stevens and three others in Benghazi. The email list included officials from the White House, State Department, CIA, FBI and others reviewing the talking points.

11:15 a.m. talking points: "....we do know that Islamic extremists with ties to al-Qa'ida participated in the attack."

Added: "On 10 September we warned of social media reports calling for a demonstration in front of the Embassy [in Cairo] and that jihadists were threatening to break into the Embassy." This news that a warning had been given was later removed.

Added: "The Agency [CIA] has produced numerous pieces on the threat of extremists linked to al-Qa'ida in Benghazi and eastern Libya. These noted that, since April, there have been at least five other attacks against foreign interests in Benghazi by unidentified assailants, including the June attack against the British Ambassador's convoy. We cannot rule out the individuals has previously surveilled the U.S. facilities, also contributing to the efficacy of the attacks." This news of advance warning of a threat was later removed.

E-mails were provided by the Administration to certain Congressional committees for limited review. The committees were not permitted to copy the e-mails, so they made handwritten notes. Therefore, part of the quoted e-mails may be paraphrased.*

In a 6:52 p.m. email: John Brennan, then-Deputy National Security Advisor (now head of CIA) asked for removal of "the crowd almost certainly was a mix of individuals from across many sectors of Libya society."

7:39 p.m. email: State Department spokeswoman Victoria Nuland expressed the most sweeping concerns. "I have serious concerns about all parts highlighted below in arming members of Congress with information to start making assertions to the media that we ourselves are not making because we don't want to prejudice the investigation... Why do we want the Hill to be fingering [al-Qaeda linked] Ansar al-Sharia when we aren't doing that ourselves until we have investigation results? And the penultimate point is a paragraph talking about all the previous warnings provided by the Agency [CIA] about al-Qaeda's presence and activities of al-Qaeda...[which] could be abused by members of Congress to fault the State Department for not paying attention... so why would we want to cede that, either?"

8:59 p.m. email: A facilitator of the email threads answers Nuland's concerns about "prejudicing the investigation" by stating "The FBI did not have major concerns with the points and offered only a couple of minor suggestions." Nonetheless, they remove a paragraph referring to Ansar al-Sharia from the next version.

8:59 p.m. talking points: Changed "we do know" to "there are indications that" Islamic extremists participated in the violent demonstrations."

Removed "Initial press reporting linked the attack to Ansar al-Sharia. The group has since released a statement that its leadership did not order the attacks, but did not deny that some of its members were involved. Ansar al-Sharia's Facebook page aims to spread Sharia in Libya and emphasizes the need for jihad to counter what it views as false interpretations of Islam, according to an open source study.

9:24 p.m. email: Nuland responds: "These don't resolve all of my issues or those of my building leadership. They are consulting with NSS [National Security Staff.]"

9:34 p.m. email: Ben Rhodes, Deputy National Security Adviser to President Obama regarding a federal agency Deputies meeting that's been called the next morning to discuss the talking points: "...we don't want to undermine the investigation...we want to address every department's equities including the State Department, so we'll deal with this at the Deputies meeting."

The CIA's legislative affairs representatives loops in then-CIA chief David Petraeus, notifying him of "major coordination problems... State has major concerns... the Bureau [FBI] cleared the points but [Ben] Rhodes said they will be reviewed in the Deputies meeting."

*Editor's note: This paragraph was included in the original story submission but was omitted from a previous version due to an inadvertent error in the editing process.

9:45 a.m. talking points:  Removed: "On 10 September the Agency [CIA] notified the Embassy in Cairo of social media reports calling for a demonstration and encouraging jihadists to break into the Embassy.

Removed: "There are indications that Islamic extremists participated in the violent demonstrations."

Removed: "The wide availability of weapons and experienced fighters in Libya almost certainly contribute (sic) to the lethality of the attacks."

Removed: "The Agency has produced numerous pieces on the threat of extremists linked to al Qa'ida in Benghazi and eastern Libya. Since April, there have been at least five other attacks against foreign interests in Benghazi by unidentified assailants, including the June attack against the British Ambassador's convoy. We cannot rule out the individuals has (sic) previously surveilled US facilities, also contributing to the efficacy of the attacks."

Via email, the representative for the CIA sends Petraeus the final version of the talking points writing: "We worked through the Deputies Committee this morning and they're sending these out for final approval... State [Dept.] voiced strong concerns with the original text."

2:27 p.m. email: Petraeus answers that he doesn't like the talking points and he would "just assume they not use them... This is not what [Rep.] Ruppersberger asked for. We couldn't even mention the Cairo warning. But it's their call." Ruppersberger is the lead Democrat on the House Intelligence Committee and had asked for talking points.

Meantime, a U.N. official informs U.S. Ambassador to the U.N. Susan Rice in an email: "The first draft of the talking points apparently seemed unsuitable based on the [deputy's meeting] because they implied the CIA warned about specific attacks... [at the deputy's meeting] Mike Morell [deputy CIA director] noted the points would be edited and he would be happy to work with [State Department Deputy Chief of Staff] Jake Sullivan and [Ben] Rhodes. [Denis] McDonough [then-Deputy National Security Advisor to Obama, now White House Chief of Staff] , on Rhodes' behalf, deferred to Sullivan. Jake [Sullivan] would work with the [intelligence community] to finalize the points that could be shared with [the House Intelligence Committee].

A senior administration official told CBS News Friday: "The CIA circulated revised talking points to the interagency after the Deputies Committee meeting, which Jake attended. Jake Sullivan did not, however, comment substantively on those points."

Another administration told CBS News in an email: "The CIA circulated revised talking points to the interagency after the Deputies Committee meeting on September 15. Neither Jake Sullivan nor Ben Rhodes drafted those revised points... Mike Morell prepared them. Reports suggesting that Sullivan or Rhodes revised the points is just false. The minor edit they did make were to clarify that the Benghazi mission was not a consulate. As we have said all along, these points were revised by the CIA."

A senior U.S. intelligence official familiar with the drafting of the talking points tells CBS News: "The changes don't reflect a turf battle. They were attempts to find the appropriate level of detail for unclassified, preliminary talking points that could be used by members of Congress to address a fluid situation. "

"Overall, the changes were made to address intelligence and legal issues. First, the information about individuals linked to al-Qaeda was derived from classified sources. Second, when early links are tenuous, it makes sense to be cautious before pointing fingers to avoid setting off a chain of circular and self-reinforcing assumptions and reporting. Finally, it is important to take care not to prejudice a criminal investigation in its early stages."

Meantime, an administration official with knowledge of Nuland's role told CBS News: "During interagency deliberation of points the CIA wanted to give to members of Congress, Victoria Nuland raised two legitimate procedural concerns: 1) they recommended Congress make assertions to the media about responsibility for the attacks which the administration was not yet making publicly so as not to prejudice the investigation - points she herself was not yet authorized to make publicly. She wanted to ensure interagency consistency of messaging. 2) they selectively noted Agency warning in a manner which might have led Congress to believe the State Department had ignored them. This appeared to encourage a blame game before the investigation was complete. She did not make changes to the points. Rather, she asked for higher level interagency review, which the White House agreed was necessary. She played no further role in the handling of these points.

State Department spokeswoman Jen Psaki: "The State Department first reviewed the talking points on Friday evening with the understanding that they were prepared for public use by members of Congress. The spokesperson's office raised two primary concerns about the talking points. First that the points went further in assigning responsibility than preliminary assessments suggested and there was concern about preserving the integrity of the investigation. Second, that the points were inconsistent with the public language the Administration had used to date - meaning members of Congress would be providing more guidance to the public than the Administration."

Editor's note: An earlier version of this story included a response from former Clinton adviser Philippe Reines in which he incorrectly said Sullivan was not in the Deputies Committee meeting.  Reines tells CBS News he was mistaken.